Earlier this year, Hunter Fine and his friend Jeff Greenspan gained some viral notoriety for their street art: starting with “Hipster Traps” (where PBR and goofy sunglasses were set as bait inside a cardboard bear trap) in New York City, the two soon expanded their repertoire to include “Tea Party Traps” and “Bridge and Tunnel Traps.”

Now Mr. Fine is working solo on a new kind of public service, one that alerts new residents that their LES apartment may actually be a front for a bed bug hotel.

Inspired by a friend who suffered the plight of New York’s most notorious bugs, Mr. Fine — who works in advertising but declined to elaborate — began setting up these mini-hotel structures just this weekend on the Lower East Side. So far he has nine built, and a Tumblr for the project, encouraging others to make their own “Bed Bug Hotels” and place them outside residents that are infected. If you email him a photo, he’ll even put it up on the site.

“It’s not a viral marketing campaign,” Mr. Fine told us by phone. “It’s an art project.” But not one meant to humiliate those renters who have to walk past a structure declaring their apartment bug-riddled every day. It’s to shame the landlords into doing something about their infestations. “There’s laws against landlords not alerting tenants to bug problems…they’re obligated to care of it. But it hardly ever happens.”

As for using street art to get the message out, Mr. Fine gives all the credit to the Internet. “Using a street for a canvas, something about that’s really cool. But with the Internet…with Reddit and other sites…it’s entirely changed how many people can be reached. You get a much larger audience: that’s what’s cool about social media.”

If others start jumping on the project, Bed Bug Hotels may start being as ubiquitous as the little critters themselves. 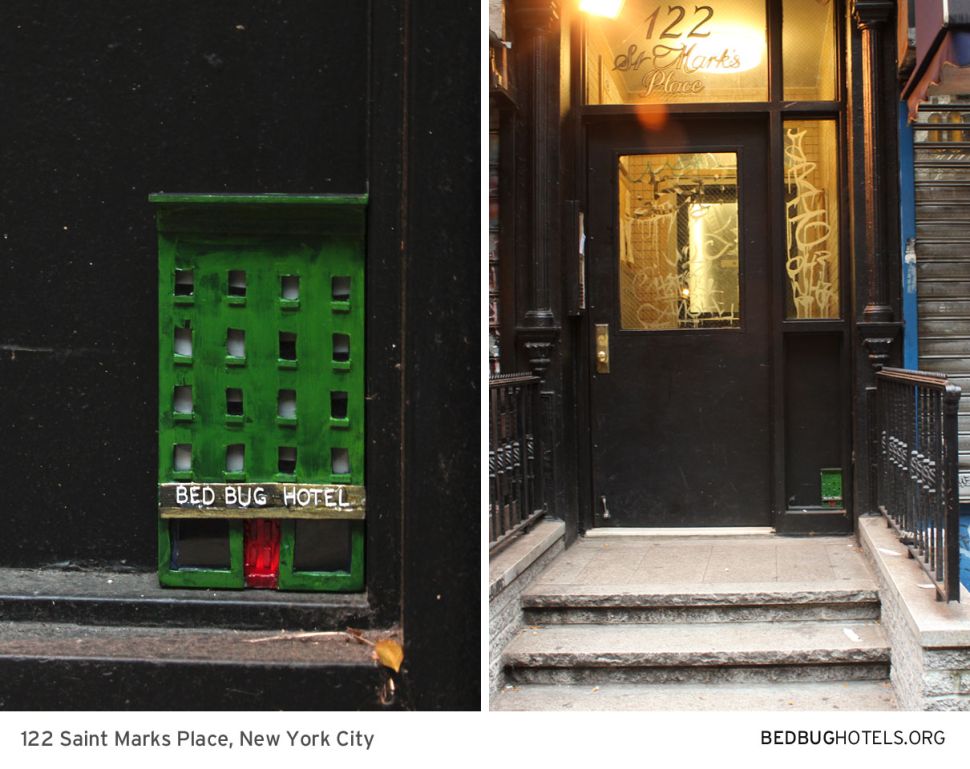