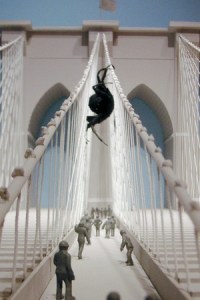 The artist's rendering of his plan.

In case you missed it over the weekend, street artist Leon Reid IV told the New York Post that if he had $800,000 and city approval, he’d absolutely put a giant vinyl spider on the Brooklyn Bridge, no question.

Mr. Reid has yet to raise the money for the project, but while many people might not know what they’d do with nearly a million dollars and the approval to negatively modify a city landmark, Reid was extremely certain about what such circumstances would mean for him: a 30-foot by 15-foot, helium-filled spider. Definitely. Why not?

“It just hit me: What would happen if a spider were crawling through the bridge, if I made it seem as if the spider wove the web of suspension cables? I thought, that’s a cool idea,” Reid said.

When we checked up with Mr. Reid he said he wanted to dress our city’s statues.