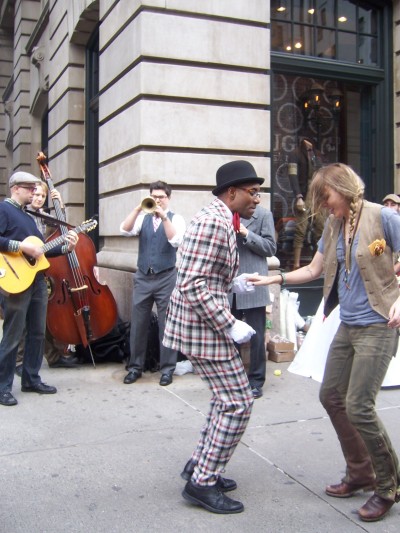 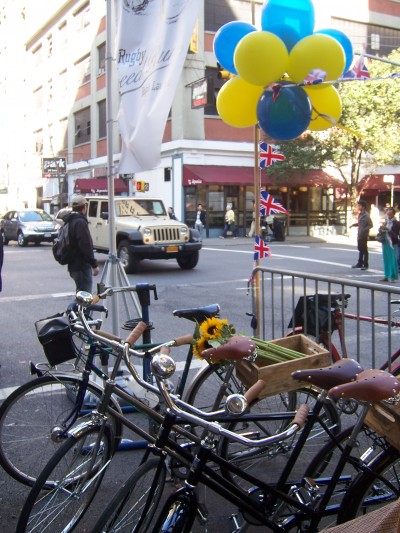 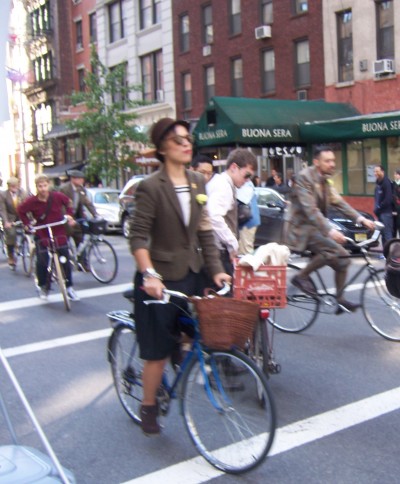 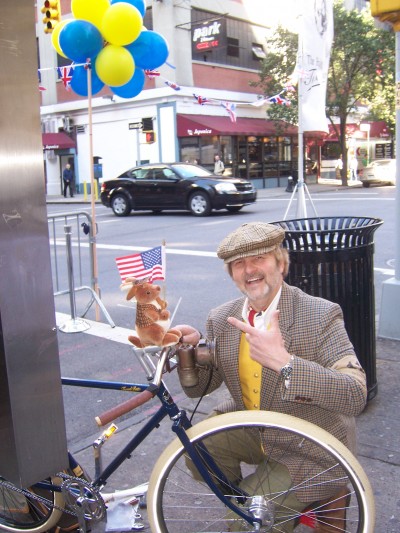 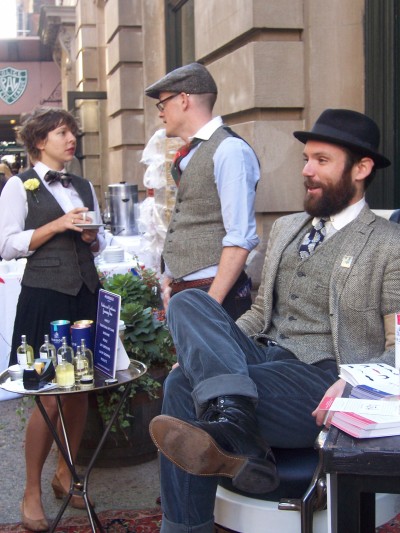 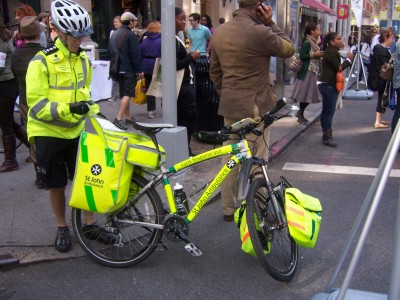 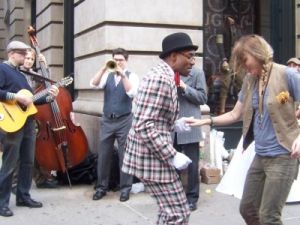 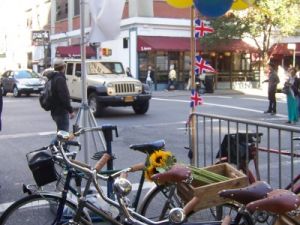 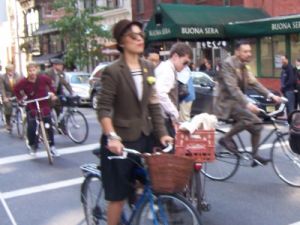 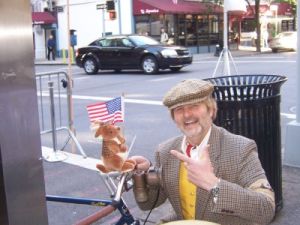 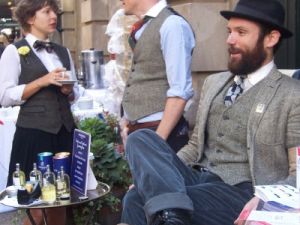 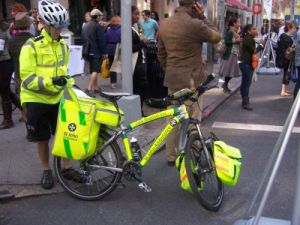 His glasses were brown, semi-rimless and matched the crisp white gloves he wore to replace modern-day fingerless bike gear. He had a black bowler hat with a tiny brown feather tucked into the lip and a red bow-tie complimented his brown, red and tan checkered suit. And, as he twirled a woman around, moving with bousterous live swing music, the rest of the sidewalk crowd watched, dazed by the energy of his imprompteau dance.

Samuel Coleman, straightening his so-called “loud” suit after the dance, said he commutes by bike from the Bronx into the city everyday for work. But that never stops his from looking his best.

“I’m always wearing a suit,” Mr. Coleman said. “I love to see women and men dress up to go to work. You hear people in suits say, ‘I’m going to change into something more comfortable,’ but, for me, dressing up is just as comfortable as wearing pajamas.”

In their 19th-century best—blazers, plus fours, loafers and vests abound—the modest crowd of stylish cycling enthusiasts like Mr. Coleman gathered for the Rugby Ralph Lauren Tweed Run Saturday in front of the Rugby store on the corner of East 12th Street and University Place. The day’s participants in the New York City Tweed Run were here supporting not only city cycling, but also the elegance of breeches and junipers.

“I really think sophistication is coming back,” said Mr. Coleman about the event.

“My theory on cycling is that you don’t need special equipment. I ride in tweed all the time. It’s safe to do that, it’s fun to do that,” Mr. Young-Ing told The Transom at the run, occasionally sipping from a delicate ceramic cup of tea, naturally.

The “metropolitan bicycle ride with a bit of style” featured live bands, a Van Leeuwen ice cream truck, barber grooming by Murdock Barbers, saddle polishing by Brooks and a Pashley bike raffle to support the World Bicycle Relief. Contests were also held for best-dressed and best moustache, with Rugby gift card prizes. A collection of old-school carnival games, including a somewhat out-of-place “Tip Trolls” booth, were set up across from a table serving tea by Jeeves & Jericho and biscuits by Woolmark.

“New York is phenominal,” said Ms. Shannon, who wore a tweed blazer and dark brown plus fours. “The city has really embraced cycling.”

Bike marshals, along with British members of the St. John Ambulance Cycle Response Unit, led cyclists on a three-mile ride throughout Manhattan. The run’s organizers decided to change the route, which was supposed to circle downtown before crossing the Brooklyn Bridge, because of the Occupy Wall Street protests as well as other events in the city.

“Under advice of the NYPD, we decided to make it shorter rides,” said James Fry, Tweed Run spokesman. The Transom mentioned the situation’s irony—preppy bike riders accommodating the 99 percent—and Mr. Fry responded that the protests were a “really complicated issue.”

Though different from the organizer’s original vision, no one at the Tweed Run seemed to mind. Allan Aughey, who travelled over 8,000 miles from Australia, came to New York for the first time to partake in the event because of what it represents.

“It goes back to a time when grace and good values were highly valued,” said Mr. Aughey, major of Clare and Gilbert Valleys Council back home. Dressed in tweed plus fours and sporting a tidy white beard, Mr. Aughey decorated his limited edition Rugby Pashley bike with a kangaroo toy holding an American flag. “Australia and America, we’re great allies,” he said of the bike.

Mr. Aughey also explained his love for tweed. “Tweed is natural, it lasts longer and is environmentally friendly,” he said with a smile.