“Was it hard?” Bill Moyers asked John Lithgow. He was either referring to the actor performing naked in his first Tony Award-winning role in The Changing Room, or to a body part which Mr. Lithgow had exposed to shocked Broadway theater-goers at the ripe age of 27.

If it wasn’t for the serious pseudo-sexual vibes the esteemed men were giving off at the New York Public Library’s event yesterday evening we might have been less interested in the sycophantic reminiscing. But this was just weird.

Other things we learned during the interview, part of the library’s LIVE from the NYPL series: the former White House Press Secretary and the Harry and the Hendersons have lived as neighbors in the same apartment building for years, that the two have been best friends for decades, and that Moyers considers himself “married” to the actor’s life. That the two men once stayed up till 1 a.m., discussing poetry and theater together, and Mr. Moyers considers Mr. Lithgow’s performance on his PBS show last year one of the most moving experiences of his life.

By now, most of us are accustomed to Mr. Moyers interview style from his years on television. You can immediately date yourself by figuring out which of Bill Moyers Journals -the one from the late 70s to early 80s, or the one that started in 2007 – first introduced you to the public commentator and ordained minister. Or possibly you know him from his Power of Myth series, which has the particular honor of being the one show where a combination of Joseph Campbell,  Star Wars, and Eastern philosophy left us utterly baffled by an otherwise straight-forward interview session.

Unlike, say, James Lipton, Mr. Moyers does not talk to his guests as if they were revered entities that have magically touched down to grace us with their presence. Which made last night – timed for the release of Mr. Lithgow’s memoir,  Drama: An Actor’s Education – so much odder.The first half of the evening was just Mr. Moyers making Mr. Lithgow read poetry, so the audience could hear the magical lilt and tenor in the Buckaroo Banzai star’s voice: first Edward Lear’s “The Owl and the Pussycat,” then Ogden Nash’s “No Doctor’s Today, Thank You,” and finally the eulogy from Shakespeare’s Cymbaline that Mr. Lithgow read at his own father’s funeral.

Mr. Moyers then proceeded to read several of the Amazon reviews from Mr. Lithgow’s new book, which had just come out that day. He also quoted the book’s pricing and its weight (discounted to $16, 1.2 pounds) before Mr. Lithgow broke in himself. “You’re so smart!”

Besides the obvious questions into the craft of acting, Mr. Moyers did bring up a recent The New York Times review which called John Lithgow “disappointingly normal” in real life, compared to the psychological, zany, and downright evil characters he’s become famous for on the big screen. “It just struck me how many times I’ve played characters that inhabit another person’s body,” Mr. Lithgow said.

“What would be the perfect body for you to inhabit?” asked Mr. Moyers. 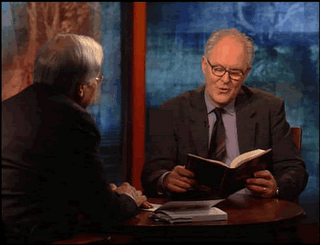