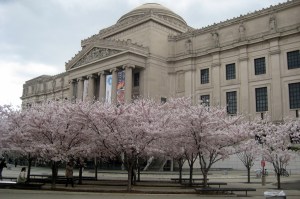 The Brooklyn Museum announced this morning that they will be increasing their suggested admission prices. The price has gone up $2.00, to $12.00 for adults and to $8.00 for students and seniors. Arnold L. Lehman, the museum’s director, was pretty candid in a statement about the reason for the hike:

“Although we regret that the continued economic climate had made it necessary to slightly increase the suggested admissions fee at the Brooklyn Museum, our renowned permanent collection on five floors of gallery space and a superlative schedule of outstanding fall exhibitions make it one of the great cultural values in New York City.”

The fees, however, remain suggested (and if you’re a poor college student, or even a stingy adult, “suggested” is typically synonymous with “free”). Also, these figures are still less than half of what it costs to get into MoMA, where members of the Occupy Museums group have been protesting the high ticket price (among other issues). Somehow, we doubt they’ll make it out to Brooklyn to form a picket line, but hey. You never know.

In other news, the Brooklyn Museum also announced this week that they were awarded the National Medal for Museum and Library Service, an honor given to five museums and five libraries each year. Other recipients in 2011 include the Erie Art Museum and Madison Children’s Museum.