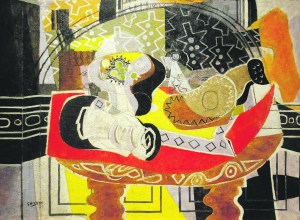 Still Life with Guitar I (Red Tablecloth) (1936) by Georges Braque.

It’s funny to ask why someone or something isn’t as popular as we think it probably should be, though it’s something we do all the time. “How could they cancel that show?” “Why isn’t that band more famous?” It implies that there isn’t a finite amount of attention, or money, in the universe and that cream rises to the top without exception.

George Braque, the subject of a major show that opens at Acquavella Galleries’ neoclassical townhouse this week, is by no means an underrated artist. If he didn’t invent Cubism, he’s credited with the first exhibition of a Cubist work, Houses at L’Estaque. Braque was the first living artist to be exhibited at the Louvre; he was given a state funeral.

Yet it’s hard not to perceive the French artist as playing second fiddle to Pablo Picasso. He’s described as a“Picassoite” in The Autobiography of Alice B. Toklas. Despite the fact that they were breaking ground together, and were in each other’s studios so frequently that Picasso used to joke that Braque was his “wife,” Braque constantly fought the perception that he was a little brother. According to Janet Flanner’s 1956 profile of Braque in The New Yorker, Daniel-Henry Kahnweiler, their common art merchant—as dealers were then sometimes known—would pay Picasso 3,000 F for a large painting in 1912, while Braque would receive 400 F for a picture of the same size.

The last big museum show of Braque’s work in New York was at the Guggenheim in 1988, and the last before that was 39 years prior. According to Artnet, of the three artists most often credited with the invention of modernist painting—Braque, Picasso and Henri Matisse—Braque’s top auction record is the lowest, going from Picasso’s $106 million to Matisse’s $48 million to Braque’s $10 million.

When reminded of this last fact in the private sales office on the third floor of Acquavella Galleries, which has high ceilings, restored antique furniture and a white carpet, so that it resembles the Oval Office, Nicholas Acquavella and gallery director Michael Findlay balked.

“The danger of looking at auction records is they don’t reflect what might happen in rooms like this,” Mr. Findlay said, gesturing to the ornate room where countless paintings have been sold, with a handshake, for tens of millions of dollars.

“If you use that rationale,” Mr. Acquavella said, “Jackson Pollock has only sold for $11 million. Everybody knows that if the right Pollock came up at auction, forget it, it’d be a telephone number and a zip code.”

Nothing is for sale in this Braque show, which features works from 14 museums and private collections, so when the two discuss the show there seems to be an element of education and philanthropy about it, with any benefits to Acquavella Galleries being intangible.

The show hopes to offer a comprehensive view of Braque that many museums simply aren’t capable of producing because most have only one or two works. This is partially due to the fact that Braque wasn’t terribly prolific, especially when compared to Picasso. As a consequence, Mr. Findlay said, it’s difficult to understand the context of individual works without an exhibition like the one the gallery has assembled.

“At a museum, you will not be able to see even three or four works to compare, and it’s only really with a critical mass like we have downstairs that you can see how important the artist is,” Mr. Findlay said. “At a museum, you can be moved by that one work but then you buy the postcard and that’s it.”

The Acquavella exhibition is primed to show Braque’s evolution. The first room alone, which spans around 36 months of his career, starts with his Fauvist landscapes, painted in acidic, almost neon colors. Then the landscapes begin to take the form of cubes, the hillsides turning into a still lifes; by the end of the room the palette is muted. The color almost leaves completely in the next rooms of the show, as he becomes more abstract, then obsessed with collage. But hints of the vibrant Fauve palette return in later years as he embraces and deconstructs still life painting. It’s fair to say that if Picasso is the better-known Cubist, this exhibition shows that Braque was the one who couldn’t let the style go.

Cubism did seem to be a joint effort for the artists, as they moved together through the various phases of it that came to be described by words like analytic, synthetic and, for some reason, Peruvian. There was give and take—Braque was even dismissive of some of Picasso’s early Cubist work, reportedly telling him, about Les Desmoiselles d’Avignon, “Despite your explanations, in this picture of yours it’s as if you were trying to make us drink petrol to spit fire.” In Pace Gallery founder Arne Glimcher’s 2008 documentary, Picasso and Braque Go to the Movies, Picasso biographer John Richardson tells an anecdote in which Picasso visits the home of collector Douglas Cooper and eyes the first papier collé collage piece, which Cooper had purchased from Braque. Picasso had already made collages, but this style was very much Braque’s own, since he trained as a decorator. When Cooper told Picasso where Braque had purchased the wall paper he incorporated into the piece, Picasso apparently responded, “I think on my way back, I’ll stop by that wall paper shop and buy some of that paper and show Braque how I would have done it.”

The friendship fell apart shortly after World War I, during which Braque received a severe head injury. The two artists pursued divergent subject matter, with Braque settling into still lifes and Picasso, famously, going on to have one of the most diverse careers imaginable—one that ranged from classical sketches to abstracted portraits to sculptures and ceramics. Braque developed in a straighter line, and continued to probe Cubism’s depths.

“Picasso, in a way, was rather like—what’s that bird that goes into other birds nests?” Mr. Findlay said. “He’d break in and steal and he admitted that he loved to do that and was protean, but what was invented at that time was something that Braque developed in his work into the ’40s and ’50s. It doesn’t look like early Cubist work, nor should it, but the language he created he used for the rest of his life.

“I think he took what was invented to create a Cubist space and he used those inventions in a very poetic, literal way for the rest of his life, continuing to break new ground with metamorphosis, with illusion, with a way of seeing and thinking and creating,” he added.

Picasso’s popularity may simply be a statistical question in that, given the kaleidoscopic variety of his output, there’s a Picasso for everyone, museum-goers and collectors alike. Braque tends to appeal mainly to collectors with a heavy Cubist streak, but Mr. Acquavella said he’s reached out to a range of collectors in publicizing the new show.

“New collectors unfortunately aren’t familiar with the work because they’re only familiar with what the market shows them,” Mr. Acquavella said. “Maybe a show like this will open people’s eyes up a little bit, and maybe it’ll loosen some Braques out of collections.”

And that would be beneficial to the Braque market. David Norman, co-chairman of Sotheby’s Impressionist & Modern art department, said Braque’s classic early works could easily net some $40 million.

“There are a few avid, hungry collectors for Cubism who would pay not exactly as much as they would for a Picasso but probably close to it,” Mr. Norman said. “Not because they’ve been dying for a Braque Cubist but more because they’re dying for a great Cubist in general.”

It’s far from certain that Mr. Acquavella will ever see that payoff, and any other benefits the gallery might attain through the show are in the ether, but mounting a scholarly, nonselling loan exhibition that is free and open to the public is something that Mr. Acquavella said has become a mark of the gallery business, and one that distinguishes it from the auction houses.

“The business is getting more and more competitive and if you want to do something now, more and more is expected of you,” he said of publicizing the show. “It really doesn’t have anything to do with the business—we don’t do more or less business whether people review our show or not, but we want people to realize this is here for them. ”

As Mr. Findlay walked us out of the gallery, he took us through some of the galleries where the Braque paintings had just been installed.

“You and I are both looking at it through a kind of 2011 art market lens,” he said and made his hands into a very narrow telescope, which he placed against his eye. “It’s very difficult to be outside that box but there are probably are a lot of noncollecting art lovers and a lot of academicians and scholars who would be astounded to be told that Braque was considered lesser than Picasso. ‘Really?’ they’d say.” He lowered the telescope. “They’re reading books and they’re not influenced by the market angle at all and they think Braque and Picasso, well, that’s like tea and coffee, or something.”