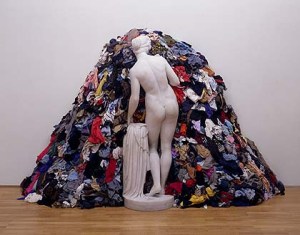 The war of words between curatorial outfit Triple Candie and the Turin, Italy-based Artissima fair intensified this weekend with Triple Candie founders Shelly Bancroft and Peter Nesbett accusing the art fair of censorship in a statement that referred to the ongoing Wall Street protests.

This latest attack comes about a week after Artissima confirmed to Triple Candie that it had canceled a project that the group planned had for the November fair, which questioned the existence of the Italian arte povera movement.

Late last week, Artissima director Francesco Manacorda said in a statement released to Artforum.com that he had canceled the show because, “I feel that I could not defend the show as it stands, given its simplistic and insubstantial content, and slight research grounding.”

The latest statement from Triple Candie–which closed its Harlem home and moved to Philadelphia last year–reads: “There is a certain irony to the fact that arte povera, which was sold to the public in the late 1960s as representing a guerilla movement attacking the system, has become the system itself. And as we’ve seen in the Occupy movements around the world, power is desperate to protect its assets. Artissima’s cancelation is evidence that arte povera is the property of the 1%.”

In an earlier email to Triple Candie, Mr. Manacorda confirmed to Triple Candie that the show had been nixed since he believed that it could be “potentially very offensive to artists and gallerists who participate in the fair” and “negatively impact government funding of the arts in Italy.” The director also alleged that Triple Candie failed to reply to questions that he sent about their controversial proposal, a charge they deny.

On its website, Triple Candie detailed its plan, which sought to present the “unreliable, contradictory” accounts of the founding and history of arte povera, a term coined by Italian critic Germano Celant in 1967 to describe the work of contemporary artists like Jannis Kounellis, Mario Merz, Michelangelo Pistoletto and others. “We don’t believe Celant,” they wrote in the catalogue. “His story has changed too many times.”

Triple Candie add in their latest letter, “The fair needs people like Germano Celant and Beatrice Merz [a curator and daughter of artists Mario and Marisa Merz] to drive sales,” and notes that curators Richard Flood, Frances Morris, Carolyn Christov-Bakargiev and Dan Cameron have in the past all questioned the legitimacy of arte povera as a coherent movement. “Such a statement might very well be incendiary, especially coming from Americans, but it is not without an intellectual history,” they write.

Artissima has not yet responded to Triple Candie’s latest shot, though with the opening of the show less than three weeks away, the pair’s project will almost certainly not happen. However, visitors to Italy will be able to take in a gigantic exhibition about arte povera, curated by Mr. Celant, which is spread across five of the nation’s museums.