Well, this is sort of a scary story: Marshall Garrett, one of the protesters who was arrested during Saturday’s Occupy Wall Street march for trying to hold a General Assembly in Citibank, told the Village Voice what went down that day. Apparently a plainclothed cop had been very well informed of the situation ahead of time and hidden himself in the crowd.

Here’s what Mr. Garrett told the paper:
But what was unknown to us and to a lot of people that day, including those in Times Square, was that there were undercover cops already there, paid to be disruptive and to be loud. One undercover cop present [at Citi] was louder than the entire group.

How did you know he was an undercover cop?

He arrested one of the protestors outside, and slammed her into the wall, and pushed her back into the bank. We all saw him at the precinct with us. He was laughing with the fellow white shirt cops, telling them about what we’d been saying, basically. It was a bit startling how inside their information was – how they were being paid to go to these protests and put us in situations where we’d be arrested and not be able to leave.

Now, it didn’t require a lot of researching to figure out Occupy Wall Street’s plans for Saturday. They had broadcasted a lot of the information out on their website, OccupyWallSt.org. But when it came down to which banks would actually be targeted for protests, you would have needed to be in Washington Square Park that day in order to be given instructions. (Protesters were split into groups and told to go and close their accounts in either Chase or Citibank.)

So either the Washington Square Park police were able to find out and radio ahead to plainclothes detectives which locations to situate themselves in, or the Occupy Wall Street movement has a couple of NYPD detectives moving inside of their ranks already. Or, Option C, as presented in the blog Red Green and Blue: the kids that were planning the runs on the bank just talked too much about it on social networks.

Update: Or, you know, the cops could have figured it out from Thomas Ryan, who has been forwarding all the Occupy Wall Street listserve information to the FBI, NYPD, and Andrew Breitbart. 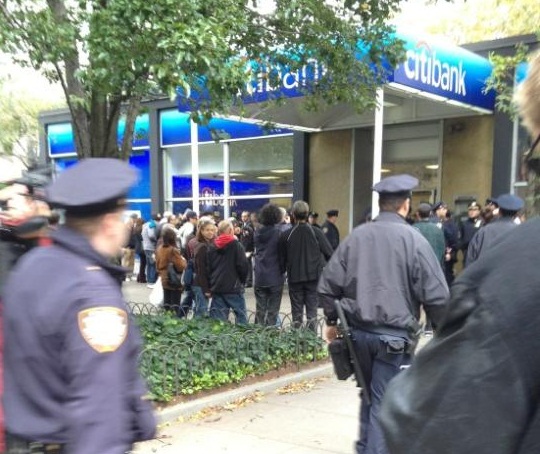