Normally we’d say that there is no way New York City Republican Councilman Dan Halloran just happened to be at the Occupy Wall Street protests today, and just happened to run into his Democratic coworker Ydanis Rodriguez, and those two just happened to break out with an impromptu civil argument about taxes. But that’s what both of these elected officials” spokespeople are saying to Capital New York, so who are we to argue that this was a pre-planned event?

After all, City Hall isn’t that far away from Zuccotti Park. And what good would a public forum do for Mr. Halloran, when Mr. Rodriguez has been down to the protest on at least one other occasion, mingling amongst his people and giving Spanish-language interviews. The best Councilman Halloran could do was invoke Ron Paul and hope there were some Libertarians in the audience. There was actually an accidentally candid moment of the Republican speaking to protesters today, captured on a video walk-through of the park this afternoon. (Clip starts at 1:45)

Unfortunately, there is no video yet of Mr. Halloran vs. Mr. Rodriguez, but we’re sure it was great. According to Capital:

According to the Rodriguez spokesman, Halloran spoke about his support of term limits and believes everyone, including poor people, should pay taxes.

Rodriguez, in turn, argued a position more in line with that of the left-leaning, anti-corporate protesters, which is that wealthy New Yorkers and Americans needed to pay more than they currently do in order to lessen the financial burden on struggling members of the lower and middle classes.

We’re sure that went over really well: Councilman Halloran is lucky to have made it back to the office without being pelted with rotten produce Chicken McNuggets. 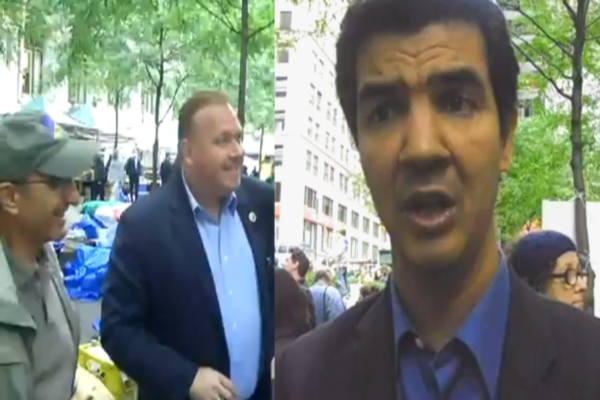