There are no berets.

But it is a resistance movement, in which Assembly Majority Leader Joe Cryan (D-20) will test the loyalties of his fellow caucus members by insisting that a leadership vote stay among Democrats, unfettered by minority Republicans.

Tired of being second in command of a fractured Democratic caucus, which handed victories to Gov. Chris Christie without a real political fistfight, in his judgment, Cryan, former state party Democratic Chairman, went underground all summer and fall.

There he built or tried to build an insurrection that would overthrow a leadership power totem topped by the faces of South Jersey Democrat George Norcross and Essex County Executive Joe DiVincenzo, two Democratic leaders who together control both Democratic caucuses.

Cryan worked the phones. He went face-to-face with Assembly caucus members. He corralled public sector unions. He donated heavily to fellow Democrats, enough to prompt one of his allies to remark, “He’s still acting like he’s State Party Chair.”

He made arguably as aggressive an effort as possible to get 24 commitments lined up to land a majority in a 47-member caucus.

And now, with greater urgency, alert to the fact he has just two and half weeks remaining until the caucus reconvenes for legislative reorganization, Cryan continues to seek support for the speakership of the Assembly and for a rearranged caucus leadership structure.

There are those among even his own supporters who question his temperament for the job.

“The trouble with you, Joe, is you’re always looking for a fight,” a colleague told Cryan earlier this year.

The majority leader looked back in bafflement.

“This is a fight,” said Cryan, referring to the axis efforts of Gov. Chris Christie, Norcross and DiVincenzo to cut public worker pensions and benefits by avoiding traditional collective bargaining channels.

Sources close to him say he knows the risks of trying to buck the power center of his party.

But with word of his own imminent dethroning from the majority leader chair, at this point he would rather fight and lose than accept what exists at the top right now – and he would sooner compromise for some other leadership arrangement than back the current consolidation of North-South Jersey power.

One of his friends, former Acting Gov. Dick Codey, knows the cost of crossing Norcross and DiVincenzo, who in 2009 amassed the necessary votes to sling him off the Senate presidency rostrum and watch him retreat to the back bench.

Now Codey’s helping Cryan, who may end up executing his own version of the Codey walk, but has maneuvered on all fronts to force his vision of a party. What Cryan sees presently are divided Democrats ultimately subservient to the will of a Republican governor who controls votes through relationships with powerful Democrats.

Son of an Essex County Sheriff and himself an undersheriff in Union County, Cryan played a visible leadership role on West State Street during rallies of public workers protesting the cuts. In back chambers, he agonized over the division in his caucus and the tenuous position of sitting Speaker Sheila Oliver, (D-34), whose final stand in favor of the reforms came encumbered with her public employment as an Essex County social worker, paycheck courtesy of Christie ally DiVincenzo.

Cryan wants a chance to fight Christie on equal terms, without the interference of the North and South Jersey bosses who make some caucus members feel as though the deals are already done with Christie before the debates begin.

“I don’t even know what I’m doing here anymore,” one Democrat complained to PolitickerNJ.com.

He wants to eliminate the humiliation felt by Democrats outside of the power structure whenever Christie goes out of state and brags to Republican audiences about his bipartisan leadership.

Sources close to Cryan say he believes he’s close to landing sufficient commitments to get the speaker’s job.

DiVncenzo and Norcross sources say there’s no way and add up and present lists of names that show the magic 24 on their side.

By most accounts, Cryan is in a war with Norcross, the most powerful boss in the state, whose forces talk to the same caucus members Cryan’s trying to secure in his column, and sometimes they talk to those people after Cryan’s already reached them.

At the very least, Norcross competes for their affections, and he competes to win.

Critical for Cryan is trying to make sure the leadership votes within the walls of the caucus, for if it goes to the 33 Republicans, Christie will either order them to back Oliver, or insist on a deal in which Assembly Republicans share power.

For his part, locked into securing the backing of his doubtful delegation to keep the Norcross deal in place, DiVincenzo has scheduled a rally Tuesday at the Robert Treat Hotel. There he hopes to show the nearly full (most sources say seven of eight) support of the Essex County delegation for Oliver as speaker. Those forces will co-join with the 11 South Jersey Democrats and those other Dems DiVincenzo and Norcross can drum up to make a caucus majority.

“As long as Oliver wants it, she gets it,” said a source on the inside of the intrigue, convinced Cryan won’t ultimately be able to coalesce enough support for himself. “She will have the support she needs. The speaker is seen – like the Senate presidency – as a two-term, four-year job.”

A Cryan ally said the majority leader “seems almost defeated” as he doggedly makes the rounds, other days bucked up trying to win – and trying to not go down without a fight.

And yet – one other factor insiders note is the oft forgotten fact in this sleepy cycle that there is an election scheduled on Nov. 8.

“What if Milam, for example, Conaway and Singleton all get taken out?” asked one source, referring to South Jersey Democratic family members in districts 1 and 7.

“That drops George (Norcross) from 11 to 8, weakens him substantially,” added the source (who also admitted the South Jersey boss will likely win an additional seat in LD4).

A weakened Norcross could rally straggling Democrats around an alternative. One source said an invigorated Cryan could turn to his running mate, state Sen. Ray Lesniak, (D-20), a state-sized political dealer with ties to Norcross.

Sources say Cryan could force a stalemate, at the very least, putting other people in play – the names exhaustively enumerated in past Politicker posts – to land a compromise candidate and leadership team that contains Cryan’s fingerprints. 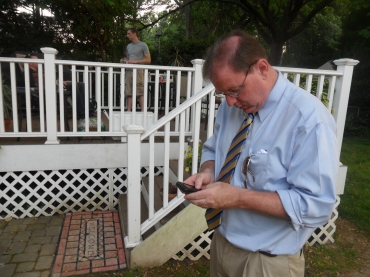