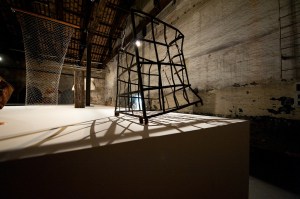 Artist Carol Bove, who is perhaps best known for her sculptures that meld Minimalist forms and display devices with found objects like peacock feathers, seashells and driftwood, will be represented jointly by Chelsea gallery David Zwirner and the West Village’s Maccarone gallery.

A press release sent by Zwirner announcing the news described the joint representation as “an innovative model in which the two New York galleries will collaborate to help the artist realize future projects and exhibitions both in the United States and abroad.”

Ms. Bove currently has work in the Venice Biennale, which runs through Nov. 11, and a group show at Maccarone, called “After Shelley Duvall ’72 (Frogs on the High Line),” which was curated by painter Bjarne Melgaard.

The artist has had one-person shows at the Institute of Contemporary Art Boston, Kunsthalle Zurich and the Blanton Museum of Art in Austin, Texas, and was included in the 2008 Whitney Biennial and the 2005 edition of “Greater New York” at MoMA PS1.