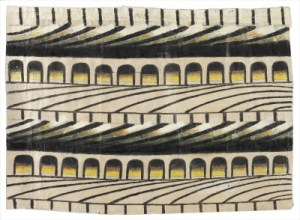 “It’s a good artist whose work grabs our attention or entertains us,” the renowned American graphic designer Milton Glaser once told me. “It’s a great artist whose work changes the way we see.” The latter part of that observation certainly describes the effect of any encounter with the drawings of the self-taught, Mexican-born artist Martín Ramírez (1895-1963), whose work first came to the art world’s attention in the early 1970s, and who has earned a place as a genre-defining giant in the canon of outsider art’s still-evolving history.

Ramirez’s work is hardly unfamiliar to many art aficionados, but its history and meanings are still not entirely understood, even by experts. Three years ago, the American Folk Art Museum exhibited a group of hitherto unknown drawings Ramírez had made during the final years of his life. They had been selected from a cache of more than 140 works that a northern-California family had found in its garage and were dubbed, in that exhibition’s title, “The Last Works.” That presentation, which came a year after a Ramírez retrospective at the same museum, unexpectedly forced a reconsideration of the autodidact artist’s life and oeuvre. Last week, the New York gallery Ricco/Maresca opened “Martín Ramírez: Landscapes,” a show that provides yet another opportunity   to reexamine a legendary outsider’s singular artistic accomplishments.

Both within the context of Ramírez’s own body of work, with its distinctive draftsmanship and signature, sensuous forms, and more broadly speaking, within the field of 20th-century drawing, the works on view expand and deepen the meaning of what landscape images can be. Another reason this show may be a milestone in the history of the investigation of Ramírez’s work is that it marks the first time another batch of pictures from the “last works” is being shown publicly and, at the same time, that a few pieces that have emerged from one of the best-known-to-exist but never seen private collections of this artist’s work are being publicly displayed. The source of those latter works: the collection of the Chicago-based, husband-and-wife painters Jim Nutt and Gladys Nilsson.

That any of these works are being shown publicly now is the result of a complex set of private legal agreements between the individuals who many years ago discovered them, received them as gifts or purchased them and Ramirez’s heirs. These heirs, who are based in California, stepped forward several years ago, upon the news of the discovery and authentication of the “last works,” and asserted a claim to them. Perhaps it was only a matter of time before a known, intact, large group of Ramírez works like that in Mr. Nutt and Ms. Nilsson’s possession would be targeted with a similar claim. However, since, legally, none of the parties involved in the agreements with the entity the heirs created, the Estate of Martín Ramírez, can speak about them, the scope of the estate’s existing and potential, future claims cannot be known. Ricco/Maresca is the Ramírez estate’s official—and exclusive—agent for the artist’s artworks. The legal firm Boundas, Skarzynski, Walsh & Black, LLC of New York, Chicago, Princeton and London, notes on its website that it represents the estate and that the artist’s heirs “include 13 adult grandchildren who now receive compensation for the drawings, ‘Life Story Rights,’ and copyright issues.”

Ramirez’s works are intriguing to collectors not merely for the fact that they are stunning—which they are­—but also because of their maker’s life story. In the field of outsider art, aspects of an artist’s biography and the story of how his or her work became known often are inextricably linked. In Ramírez’s case, to be familiar with them is to be able to appreciate more fully Ricco/Maresca’s showing of some never-before-seen masterworks.

The son of a sharecropper from a devout, Catholic family, Ramírez was born and brought up in Jalisco, the state in west-central Mexico that is closely linked to such Mexican cultural icons as mariachis, ranchera music and tequila. He received no formal education, but his father taught him basic reading and writing skills. A capable jinete (horseman), he owned his own horse and a pistol, two potent symbols of status and machismo. They did not help Ramírez pay for his own piece of land, though, so in 1925, like many Mexicans from poor, rural areas, he headed north to the U.S.

In California, he is believed to have worked as a miner and a railroad-builder. In 1930, following the Cristero Rebellion, a Mexican civil war in which armed Catholics fought the federal government’s secularizing forces, Ramírez decided to stay in the U.S.