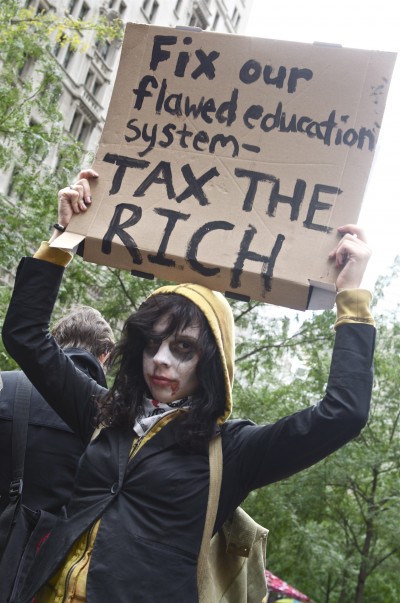 Such high hopes in being able to go home later and interpret what this imagery means. No we've been staring at this photo for twenty minutes with our jaws slack and a little bit of drool hanging out. 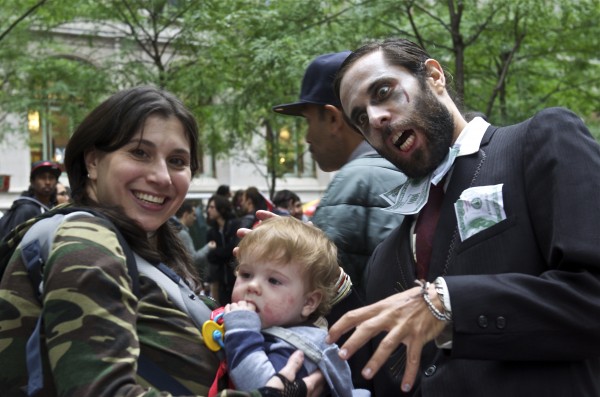 As he poses with a lady and her baby. 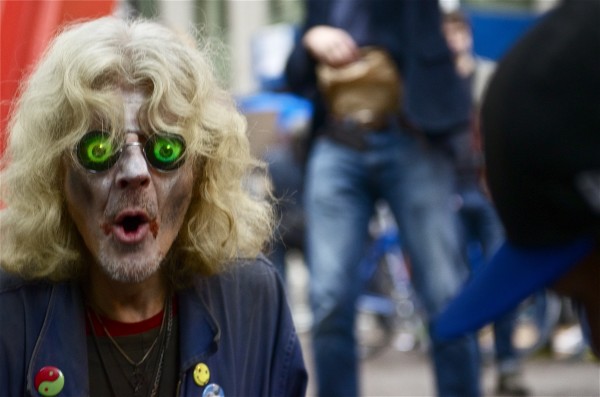 This was that point. 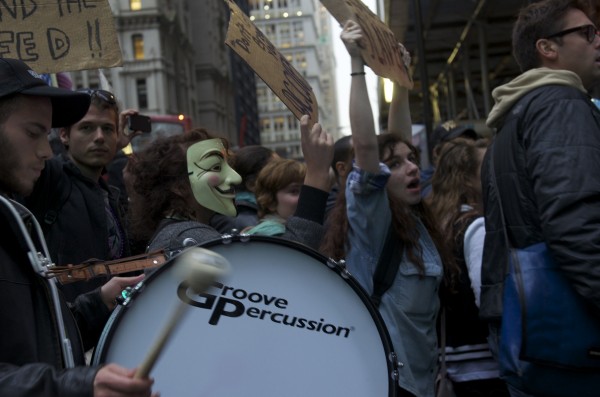 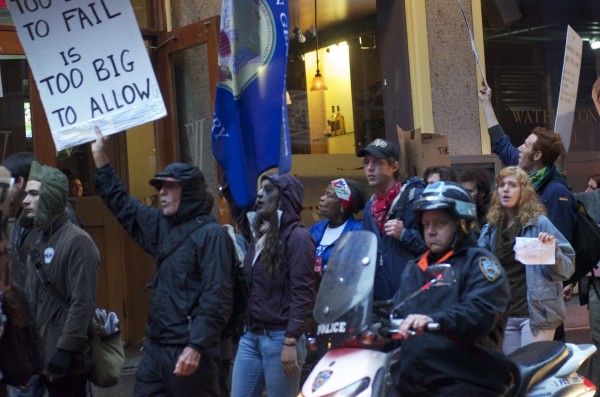 We're guessing the woman on the motorcycle who just wants to go home already. 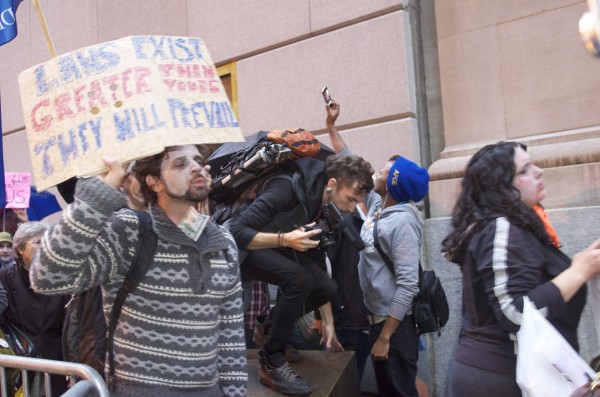 ...that's kind of when you really have to give credit to the kids who spend all their time protesting. They've dulled their senses to autopilot to support their common cause. 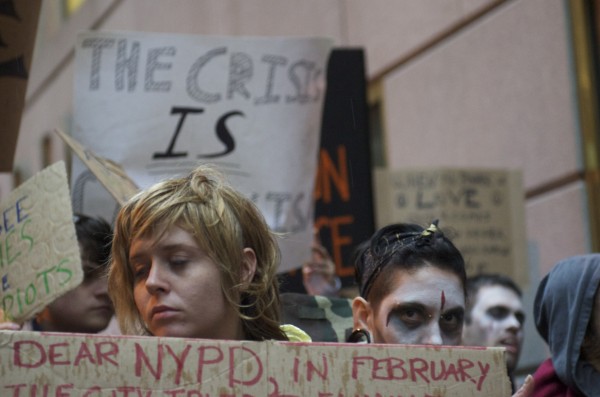 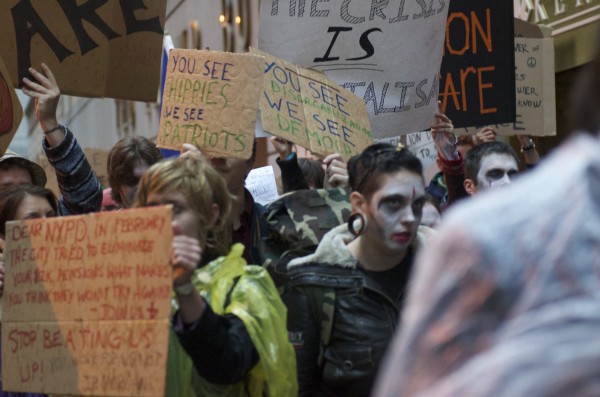 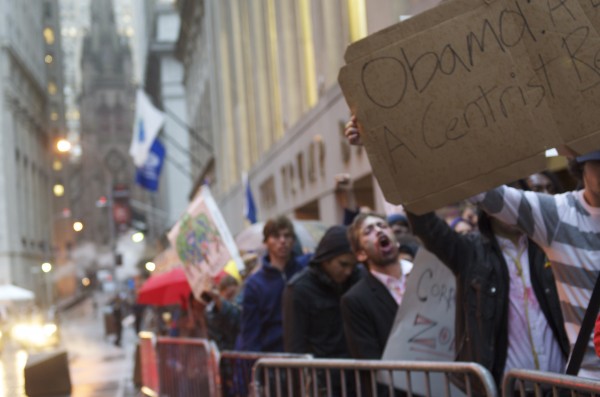 We kept expecting nets to be lowered on either side, trapping the protesters. But it was literally too occupied on Wall Street at 6 p.m. with gawkers coming out of work to pull another stunt like Saturday's. 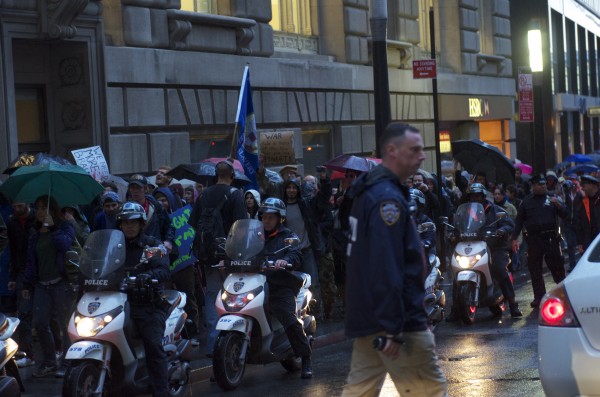 We actually thought to ourselves, "This is probably what a real zombie invasion would look like."
Advertisement 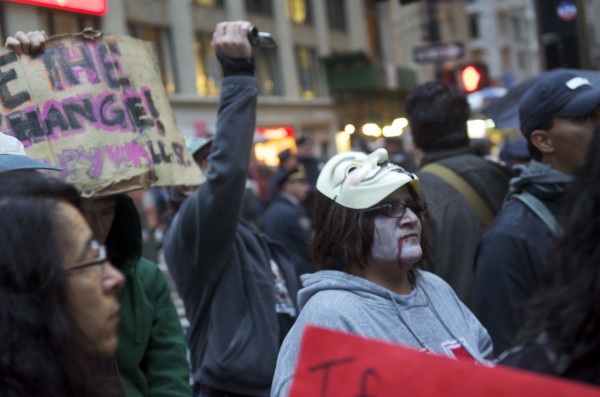 Wrap your head around that one. 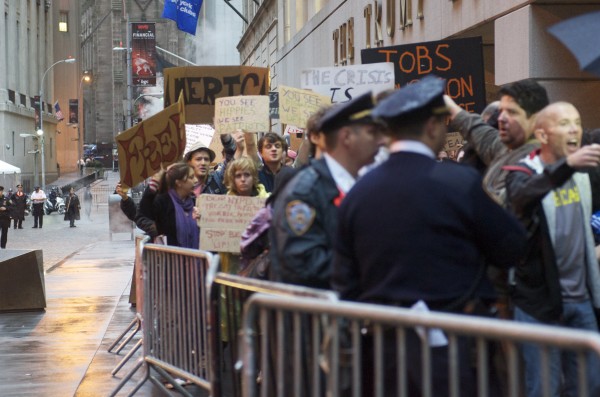 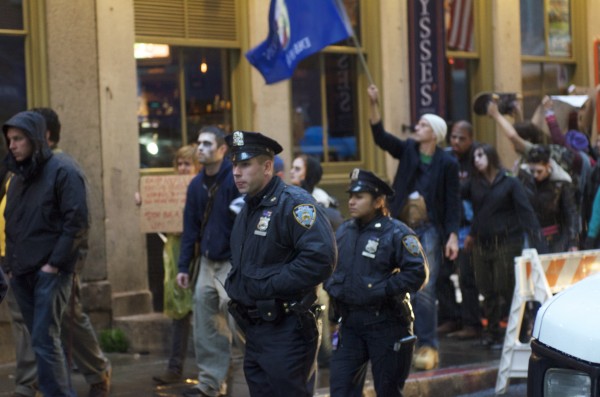 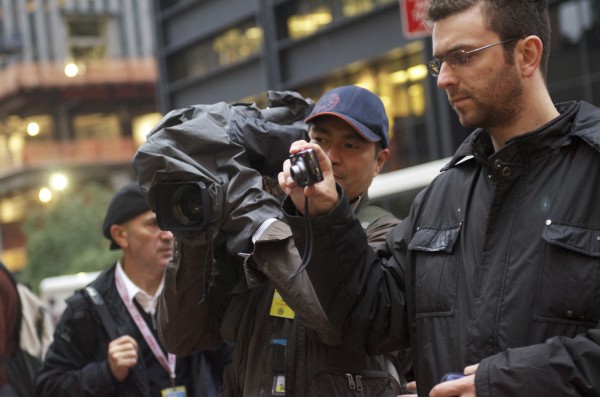 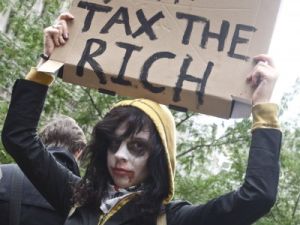 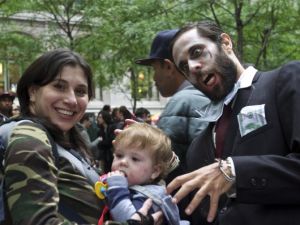 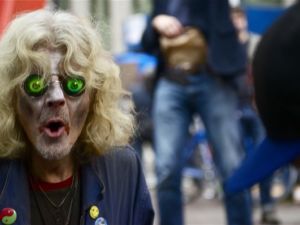 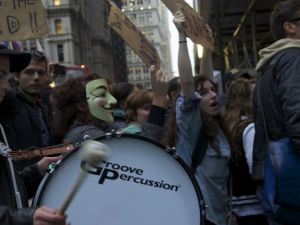 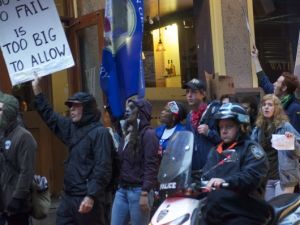 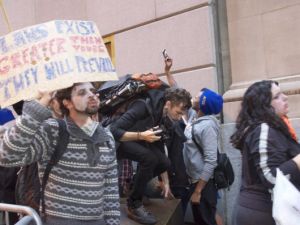 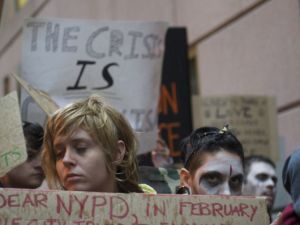 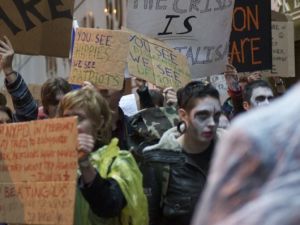 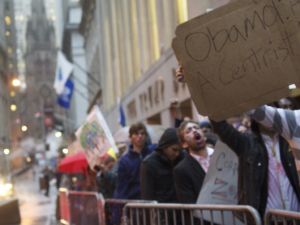 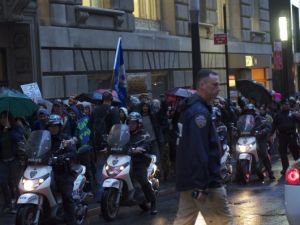 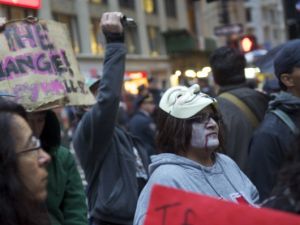 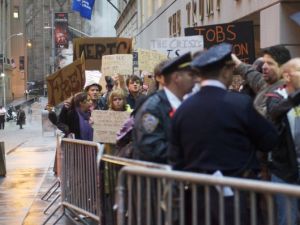 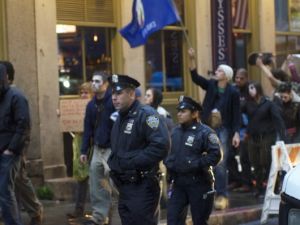 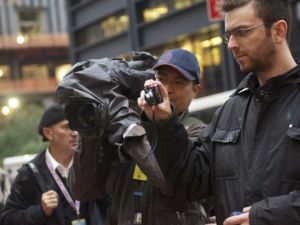 What better way to engage the pros and cons of the Occupy Wall Street movement than to see it in terms of a zombie invasion? Yesterday, Zuccotti Park’s temporary residents actually dressed — and as the day wore on with its unrelenting marches and rain — began to act like the shambling undead. That’s when the metaphor started melting away to expose something a little more scary.

What started out as a visual play on the mindlessness of corporate drones evolved into an overarching analysis of this whole Occupy Wall Street thing: the group-oriented protesters, the overworked NYPD, the fed-up unions, and the exponentially multiplying press. We’re all infected.

There’s was once this great On the Media segment about how zombies have changed in cinema to reflect the anxieties of the current culture. What are we so scared of today?

What is a zombie but a conformist? What is a zombie but someone who has to go through the motions, maybe with some, some tiny instinctual primal awareness underneath it all that he’s not fully experiencing what it means to be an individual, to be human.

And film critic David Edelstein‘s take on the undead:

I mean any kind of collective delusion, Communism as well. I mean you can look at Don Siegal’s Invasion of the Body Snatchers and the Phil Kaufman re-make as, as zombie movies. These are movies in which people have their individuality deadened, and, and they, they become part of the collective.

Of course, then Mr. Romero came along and managed to tie these two opposing post-war scares — conformity in Capitalism and conformity in Collectivism — together, revealing that they are one and the same. Either way, you are going to end up relinquishing your individual thoughts to a larger consensus mindset. Either way, you are going to end up in a shopping mall (Dawn of the Dead): the epicenter of suburban complacency. Whether you are the authoritarian automaton or the slogan-chanting 99 percenter, you are not you. You are them.

Take a look through these photos from yesterday. Make what you will from the images of the assembled collectives in their different forms, and then make up your own mind. All we’re asking is that you use your delicious brain to do so. Brains…

All photos via Hannah Grant.