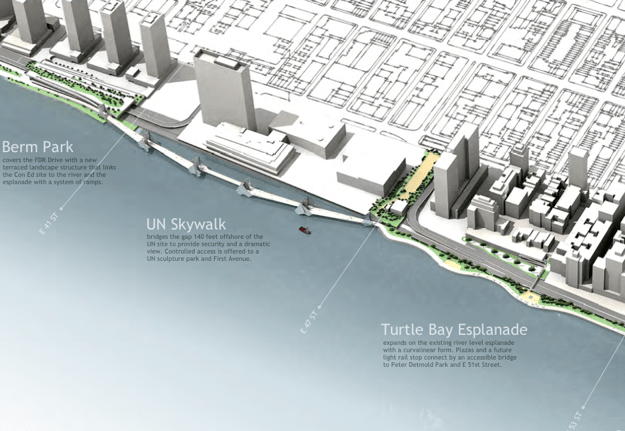 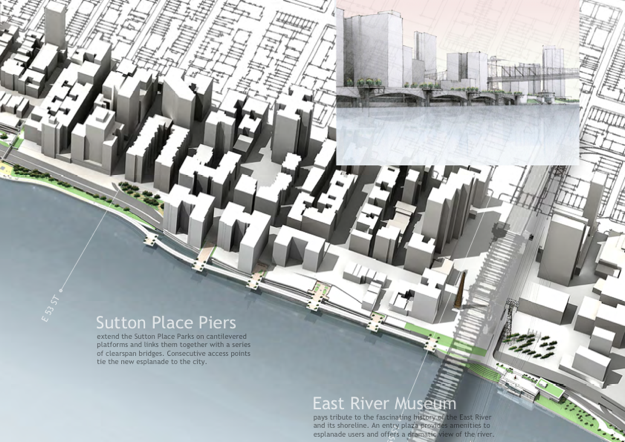 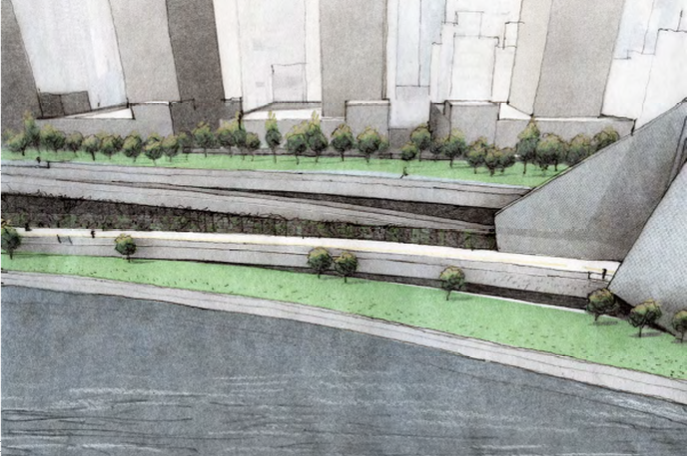 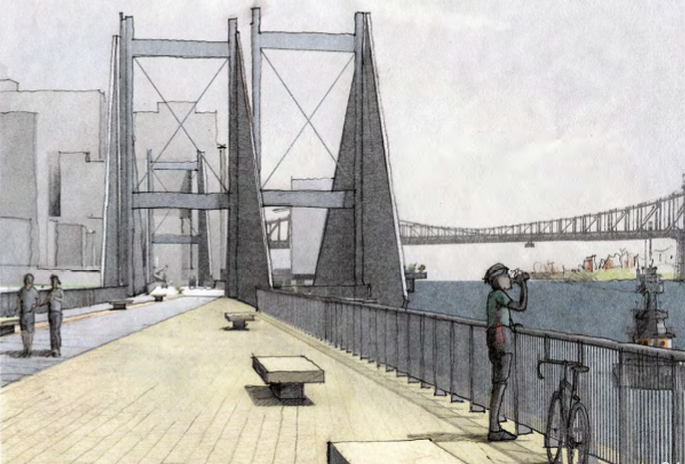 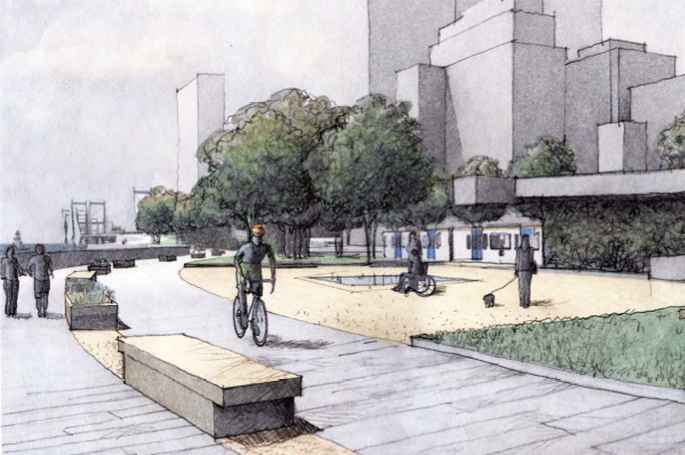 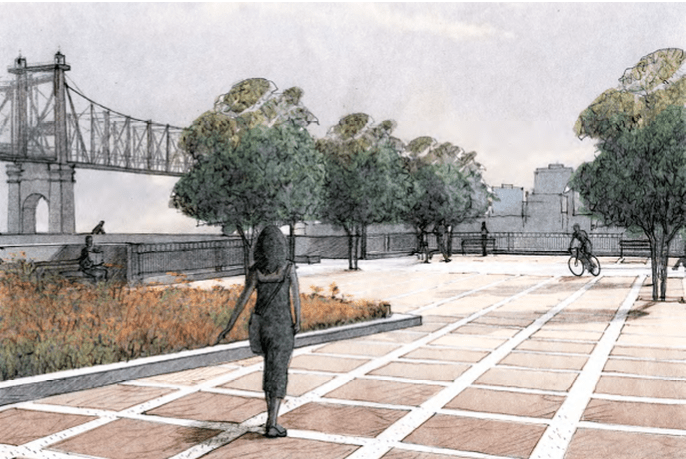 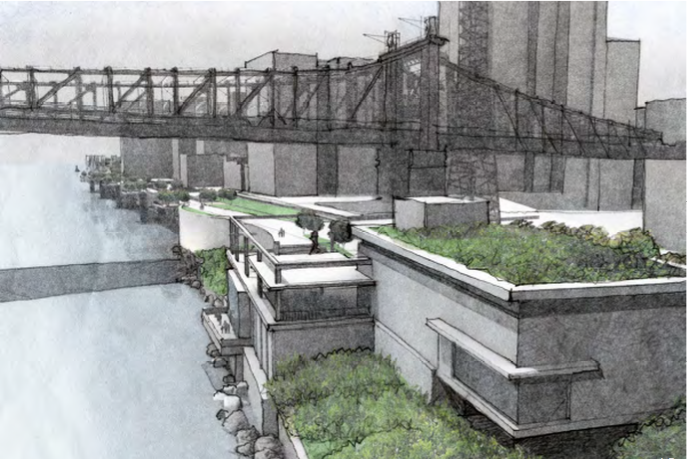 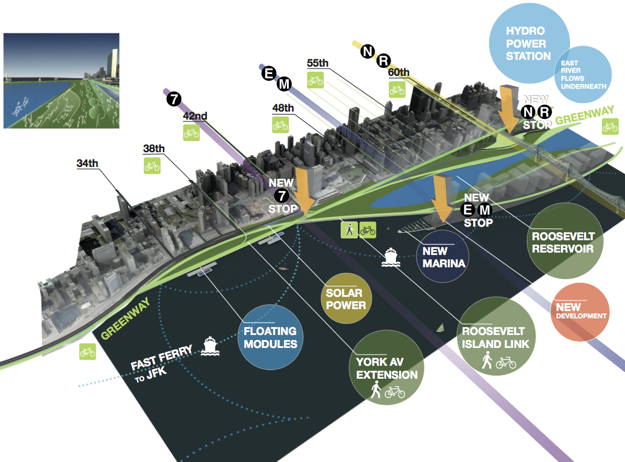 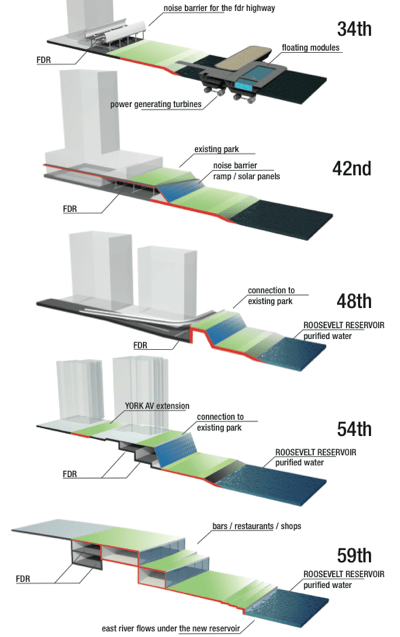 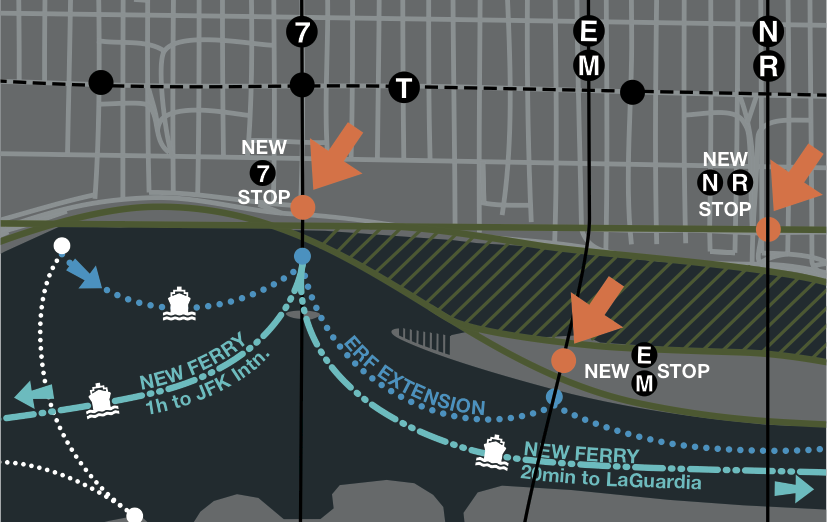 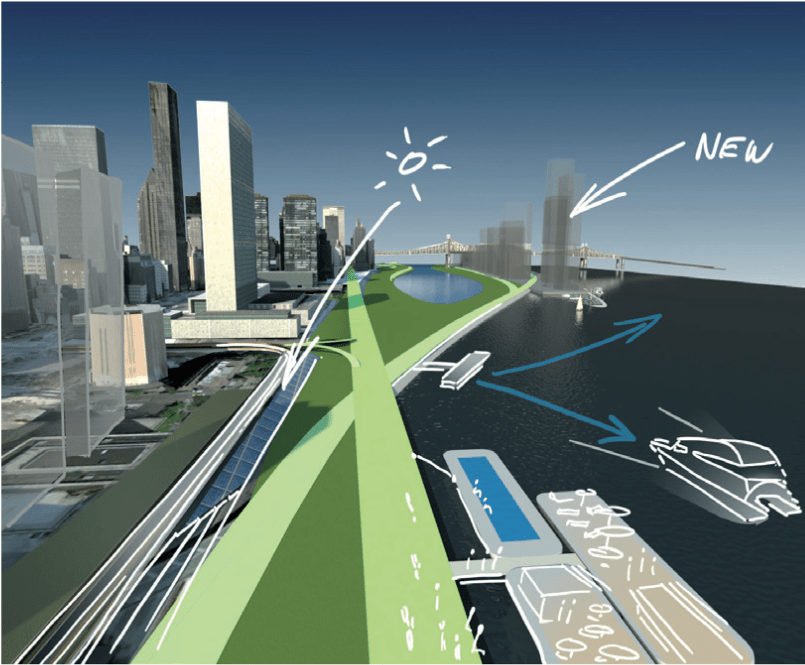 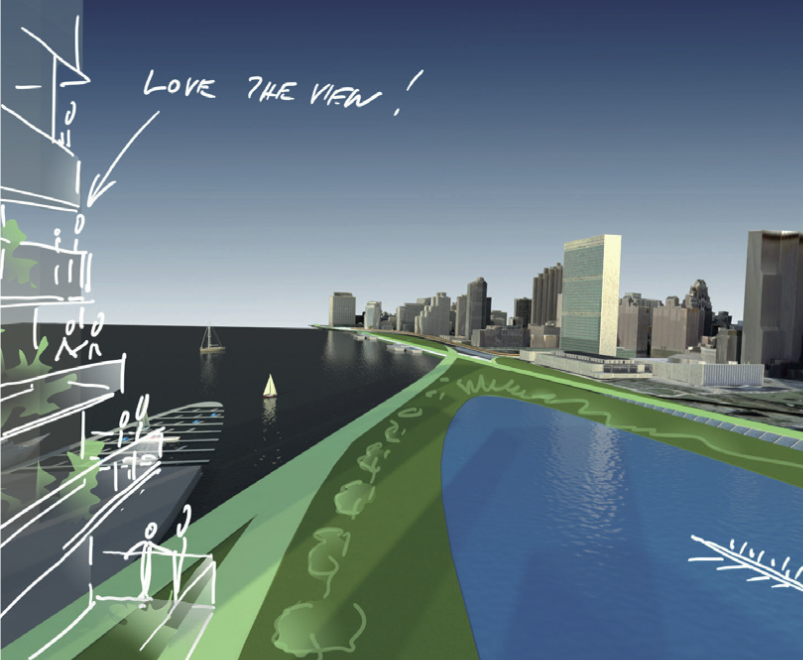 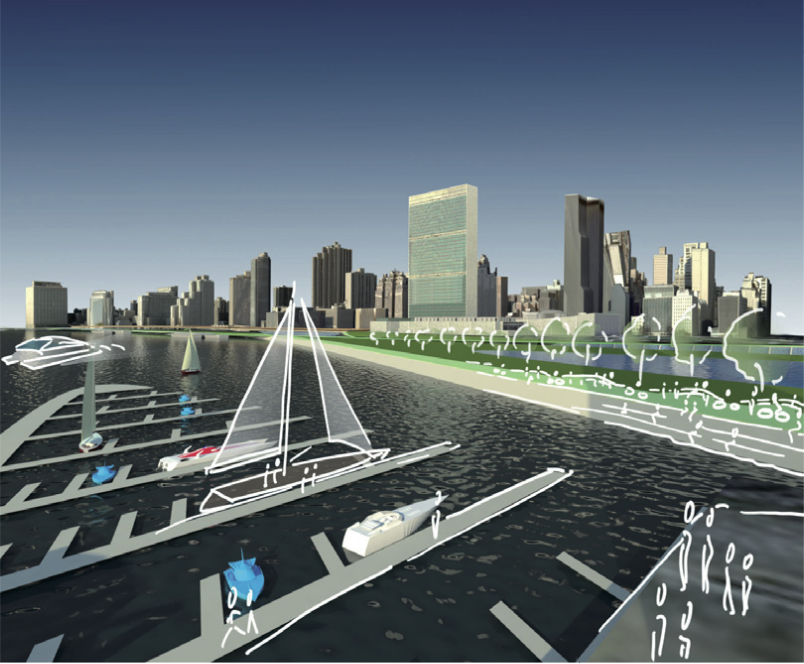 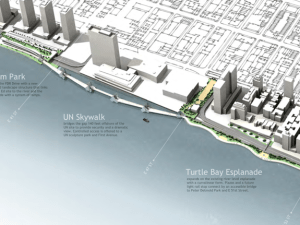 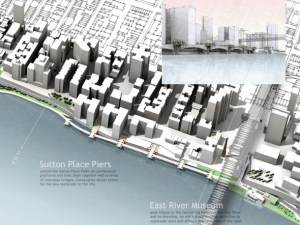 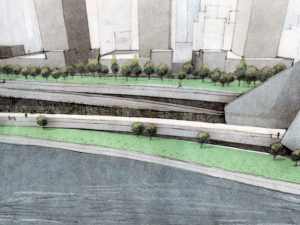 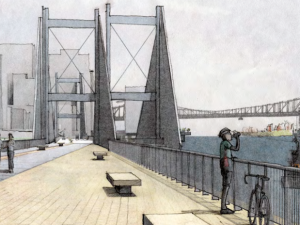 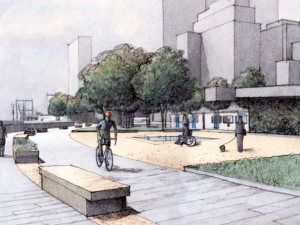 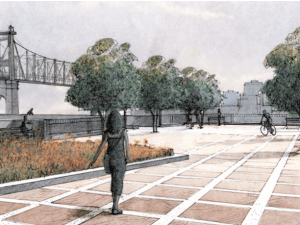 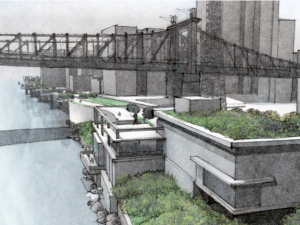 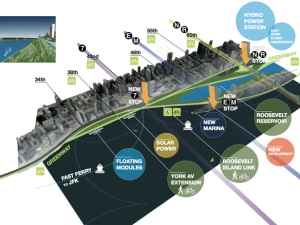 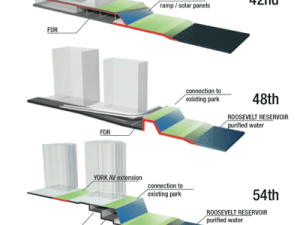 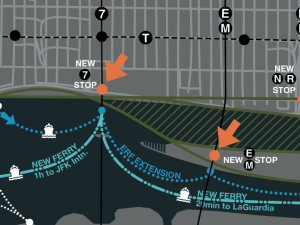 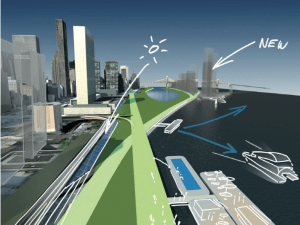 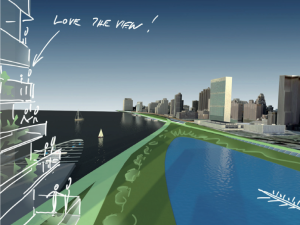 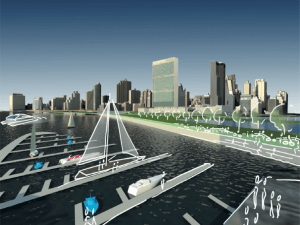 Things sure are moving fast on the East Side waterfront. Then again, who can blame the U.N. and its neighbors for being over-eager, as they have waited well over a decade for a land deal to build a new tower and riverfront esplanade. Two weeks ago, Fumihiko Maki got back to work on his designs for a new U.N. tower, and now a coalition of civic groups have announced the winners of an competition to create a new waterfront park stretching from 39th to 60th streets.

Given that the waterfront has languished for so long, the designers proposed some terribly lively schemes.

Held by Transportation Alternatives and d3, an art and design organization, Closing the Gap sought proposals “that fundamentally transform how people move through Manhattan,” as the competition brief put it. While that might be an ambitious way of thinking about the greenway, it is true this will close the 22-mile loop surrounding Manhattan island. Coincidentally,  dozens of firms from 22 different countries responded to the competition.

The winning entries came from pla.net architects of Vienna and American designers James and Madeline Stokoe. The former firm proposes an elegant and sinuous byway along the river, engaging extant infrastructure and capped by a museum, while the latter is far bolder if also more impossible in it plans, with dramatic flourishes, namely the filling in of the East River between Roosevelt Island and Manhattan. This will create a “Roosevelt Reservoir,” which creates recreational and development opportunities along the new body of water

The competition is purely speculative—there are others in the works, as well, such as the Civitas competition, which seeks solutions all the way up to 125th Street—so it is admirable to see the jurors provide us with both reasonable and visionary ideas. Somehow, the possibility of extending York Avenue or building new subway stations on landfill seems remote, especially with a $150 million budget.

“They all assumed that we can redesign our city to make it a better place to live,” Sandy McKee, an architect and co-director of d3 said. “We started the competition when the goal of closing the East Side Gap seemed like an impossible dream, but we are now one step closer with innovative, thoughtful and exciting ideas to explore.”