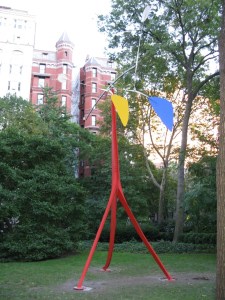 Gramercy Park, that private, fenced-off, stately, impeccably kept plot of green in midtown east that dates to the 19th century, is not the first place one might think to look for significant Modernist sculpture. Today, that changed. Longtime park trustees Arlene Harrison, a 40-year resident of the neighborhood and president of the Gramercy Park Block Association, and Rev. Tom Pike, a former Landmarks Preservation Commission official, worked with the Calder Foundation to install a large sculpture by Alexander Calder.

The Observer went to the park this morning as the large piece was being installed. Workmen milled about, grappling with large pieces of metal. The 1969 piece, called Janey Waney, was originally commissioned by the N.K. Winston Corporation for the Smith Haven Mall in the eastern Long Island village of Lake Grove, at the behest of “Baby Jane” Holzer, an arts supporter and onetime star of Warhol’s films. She was, at the time, married to Leonard Holzer, the mall’s developer. Calder named it for Ms. Holzer, who saw a tiny maquette of the sculpture at Calder’s studio and insisted he make it on a large scale.

“But it was in the media,” Ms. Harrison said. “And they reached out to us and said, ‘What would you think of having a Calder sculpture?’ And we said yes immediately.”

(In fact, a rare, 19th-century statue of a water nymph, which had been in the park for 120 years before being stored in the National Arts Club, did in fact go missing in April, and the story was, in fact, very much in the media.)

“We wanted significant art here,” said Rev. Pike, “and the Calder Foundation wanted to place– but here’s the guy you have to talk to.”

“I didn’t know they were missing a nymph,” Mr. Rower said coolly. He was wearing sunglasses. His brightly colored button-down shirt was open at the neck to reveal a large, spectacular Calder necklace. “I just thought, wouldn’t it be nice to put a piece of the 20th century in the 19th century? Simple as that.”

Mr. Rower bought a townhouse on Gramercy Park some years ago. “I’ve been enjoying the park and all of Arlene’s hard work and I would come through and see these little patches of lawn that seemed like they needed something in them. After a number of years I guess I became bold enough to suggest, ‘Why don’t we see if the park would be interested?’”

“It was a convergence of interests,” Rev. Pike cut in. “Such a beautiful convergence. The trustees wanted to have something, and we feel so fortunate to have something of such quality and excellence. This points the park in the right direction, into the future. It’s a way of embracing the 20th century. We’re not operating a museum here. We’re operating something that enhances human life in the urban community. I believe one way you can enhance life in the urban community is through the engagement with art.”

It would seem appropriate to the zeitgeist – public art is flourishing in the city these days, as The Observer noted over the summer, from the High Line to Madison Square Park to City Hall Park, and everywhere else you can think of.

And yet, Gramercy Park isn’t exactly public. It’s a private park, open only to bordering residents, who are given keys. But the towering, colorful sculpture, Ms. Harrison and Mr. Rower insist, will be very much on view to members of the public, who will be able to see it clearly through the wide slats in the metal fence that surrounds the park.

“The concept of this park is that we have a fence around it to preserve the greenery, to preserve the uniqueness of this lush vegetation,” said Rev. Pike. “It’s what the Japanese call a borrowed landscape, which means the landscape of this park is accessible to thousands of people every month who walk around and past it. This is going to be observable. People can’t go up and touch the sculpture, but they will see it.”

Mr. Rower says the fact that the sculpture will be protected, but still visible, is the reason he chose this park.

“We know the sculpture will be protected, as opposed to putting it in a city park,” he said. “We can’t put a sculpture in a city park because it won’t have the protection. You’d have to have a guard booth 24 hours a day.” In 2006, a group of Calders went on temporary view in City Hall Park as a project of the Public Art Fund, but they were guarded, and the park was closed at night. The one sculpture that was outside the bounds of the park got a bit damaged, Mr. Rower said.

There are, of course, other famous Calders on view in New York, among them a 1975 sculpture on Madison and 57th Street that is on loan from the foundation; a 1963 sculpture outside Lincoln Center; and a huge hanging mobile in terminal four of JFK that was originally commissioned for the airport’s international arrivals building. All of these sites have 24 hour security.

For Mr. Rower, it was important that Janey Waney face out towards the street. He said he wouldn’t have put it here if this were a walled garden.

Why this particular sculpture, we asked him? “We felt it was grand enough,” he said. “It goes way up, it reaches to a height and has motion at the top.”

As for the exact site in the park, Mr. Rower initially wanted it installed on the west side, nearer to his own home, but was eventually won over to a site on the east side, where the sculpture is now nestled into a spot bordered by modestly sized trees and shrubbery.

“This is the best site,” Mr. Rower conceded.

“We felt visually this was protected,” Ms. Harrison said.

The foundation is footing the bill for installation and insurance.

“The foundation made it very easy for the park,” said Mr. Rower.

“They made it so easy for us!” Ms. Harrison said.

“Now, here’s something Arlene doesn’t know,” said Mr. Rower, raising his eyebrows above his sunglasses. “This loan is for a year. And after a year it might stay a little longer. And we might swap it out for a different Calder sculpture.”

“That would be so exciting!” said Rev. Pike. “We might become a sculpture park.”

“This could be the site of a rotating Calder exhibition,” The Observer observed.

“I hope it will be,” Mr. Rower said. “At the foundation we have sculptures come back to us after having been on loan for five years somewhere else, and we restore them. From handling, paint gets scraped, and so on. Then we have it for a year before it goes somewhere else. And instead of putting it in storage, why not put it here?”

The collaboration between the Calder Foundation and Gramercy Park seems like a win-win for all. Gramercy Park residents get a terrific sculpture. The public gets to look at it. The foundation gets to have a piece, or maybe even a series of them, on view, instead of in storage.

We’d finished with our questions and were ready to leave, but there was a problem. We were, essentially, locked in. We would need to be let out of the park. Mr. Rower happened to also be leaving, and offered to unlock the gate for us.

On our way, we noted that the park is a very pretty place, and that it wouldn’t be the worst of all possible fates to be locked inside it permanently. We could be a sort of unofficial resident of the park, maybe even a sort of mascot, foraging for plants and hunting squirrels for survival.

“Wisconsin,” we admitted, grudgingly, and then he opened the gate, and we were back on the street.