Even if Geraldo Rivera was at the Zuccotti Park yesterday, Fox News has generally been a tad dismissive of the Occupy Wall Street movement. Foxnews.com (as of this writing) has no coverage of this national event on their front page stories. (Hard to imagine for a network that was so gung-ho about the Tea Party!) Red Eye‘s Bill Schulz went out to try to “prank” the protesters. Bill O’Reilly sent a producer minion out with the same mission: to belittle OWS’s cause by cutting up interviews to make people sound stupid.

Well, here is an interview that Fox News filmed, but doesn’t want you to see. The segment was shot on Wednesday for Greta van Susteren‘s show, (though it looks like the same producer from this O’Reilly segment questioning Michael Moore‘s anti-capitalist agenda) though the decision was made to leave it on the cutting room floor. The reason should be obvious pretty quickly.


The speaker giving Fox News the buisness is Jesse LaGreca, a vocal member of the Occupy Wall Street protests. This video comes courtesy of Kyle Christopher from OccupyWallSt.org‘s media team.

Now, no news organization is under obligation to air every interview they’ve filmed, especially when it makes them look bad. But you’d think that a “Fair and Balanced” network (that tells an interviewee that they are here to give them fair coverage to get any message they’d like to get out) would try to include at least a couple of opposing viewpoints to Mr. Shulz’s smarmy jokes or O’Reilly’s “infiltration” of the camp.

The ball is in your court, Fox.

Fox: Your colleague, she’d seen the protests in Greece and Europe and elsewhere. Did you guys take your cue from that? Are you hoping to cite certainly what was a lot of the tension, if not police activity. I know over the weekend there were over 100 arrests and you guys got things fired up. Are you taking your cues from the international movement and how do you want to see this? If you could have it in a perfect way, how would it be?

Jesse: Well I don’t know, its really difficult to answer questions leading to those conclusions. I’d say that we didn’t take our cue leading off of anybody really. It became a more spontaneous movement. As far as seeing this end, I wouldn’t like to see this end. I would like to see the conversation continue. This is what we should have been talking about in 2008 when the economy collapsed. We basically patched a hole on the tire and said let the car keep rolling. Unfortunately it’s fun to talk to the propaganda machine and the media especially conservative media networks such as yourself, because we find that we cant get conversations for the department of Justice’s ongoing investigation of News Corporation, for which you are an employee. But we can certainly ask questions like you know, why are the poor engaging in class warfare? After 30 years of having our living standards decrease while the wealthiest 1% have had it better than ever, I think it’s time for some maybe, I don’t know, participation in our democracy that isn’t funded by news cameras and gentlemen such as yourself.

Fox: But, uh, yeah well, let me give you this challenge Jesse.

Fox: We’re here giving you an opportunity on the record […] to put any
message you want out there, to give you fair coverage and I’m not
going to in any way

Fox:…give you advice about it. So, there is an exception in the case, because you wouldn’t be able to get your message out there without us.

Jesse: No, surely, I mean, take for instance when Glenn Beck was doing his protest and he called the President, uh, a person who hates white people and white culture. That was a low moment in Americans’ history and you guys kinda had a big part in it. So, I’m glad to see you coming around and kind of paying attention to what the other 99 percent of Americans are paying attention to, as opposed to the far-right fringe, who who would just love to destroy the middle class entirely.

Fox: Alright, fair enough. You have a voice, an important reason to criticize myself, my company and anyone else. But, let me ask you that, in fairness, does this administration, President Obama, have any criticism as to the the financial situation the country’s in…?

Jesse: I think, myself, uh, as well as many other people, would like to see a little but more economic justice or social justice—Jesus stuff—as far as feeding the poor, healthcare for the sick. You know, I find it really entertaining that people like to hold the Bill of Rights up while they’re screaming at gay soldiers, but they just can’t wrap their heads around the idea that a for-profit healthcare system doesn’t work. So, let’s just look at it like this, if we want the President to do more, let’s talk to him on a level that actually reaches people, instead of asking for his birth certificate and wasting time with total nonsense like Solyndra. 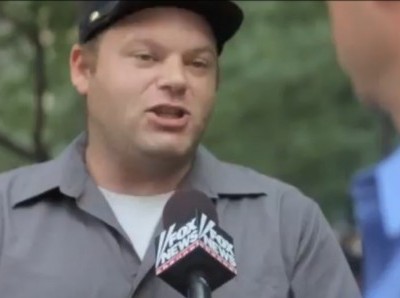