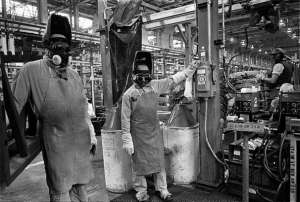 “When people look at the city, especially those toting cameras, an alarming number see an apparition rather than reality. They see looking-glass distortions, surfaces, stereotypes, reflections of preconceptions and ideology…Most follow the same road map of crumbling architecture. You know the stops:

The de rigueur abandoned home on a deserted street. Check.”

What “Detroit Revealed” attempts to document is what should be obvious—as Mr. Stryker puts it: “There is beauty and ugliness, progress and stagnation.” In other words, Detroit is an American city, with all kinds of life inside of it. Read the full review here. The show is up at the Detroit Institute of Arts until April 8 if you happen to be passing through Detroit.