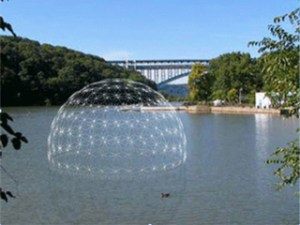 Harvest Dome, a large floating metal structure made from recycled umbrella shafts, broke free of its moorings and crashed onto Rikers Island, according to DNA Info. The dome had been traveling by river from the Bronx to a public display in Inwood Hill Park. The project was meant to represent “a physical revelation of the city’s accumulated waterborne debris.”

“Floats on a ring of 128 recycled soda bottles…the structure was pulled along by a boat that tugged a pontoon of six canoes, which were manned by two people who traveled with the unit in order to monitor the installation and make sure the canoes did not sink.”

Needless to say, things didn’t work out for those two people.

When weather got rough, the canoes began to fill with water and they had to cut the rope mooring the artwork. Upon finding the dome–with six unmanned canoes and no passengers–prison guards “pulled the structure onto the island by rope before towing it with a truck.”

The deputy commissioner for public information at the Department of Corrections told DNA Info, “During that action it got disassembled.” Amanda Schachter, one of the architects who created the project, said it had been reduced to “a pile of broken plywood and tangled metal.” In other words: debris.

Residents of Inwood were reportedly upset when the project did not arrive at Inwood Hill Park as planned.