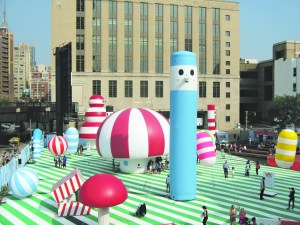 "Rainbow City" by Friends With You.

Last Wednesday artists and techies crammed the main hall of General Assembly, one of Silicon Alley’s group workspaces, for a panel called “Art Outside the Gallery.” The discussion included entertaining takes on how people discover new art these days: interior designer and set decorator Christina Tonkin described how one client, an unnamed New York Yankee, wanted the painting that hung in superagent Ari Gold’s office on the HBO show Entourage. (It wasn’t a real painting, so she had it reproduced by the show’s set designer). Also on the panel was the affable painter Richard Phillips, who regaled the audience with anecdotes about texting with Lindsay Lohan.

Before the panel we caught up with Mr. Phillips to ask him if he had any collectors in the tech community.

“I think that it’s quite likely,” said Mr. Phillips, whose film starring Ms. Lohan has been a hit for just about everyone with a Wifi router. “These people are certainly aware of what I do and we’ve made a concerted effort to address this environment.”

With more crossover than ever before between the art world and the tech industry, it may come as no surprise that New York’s tech stars have slowly started collecting art, but the recent mingling of the two booming industries has demonstrated much about the way the two businesses work today.

“Very few real, serious collectors came out of it,” Tim Nye said of the ’90s dot-com bubble. Mr. Nye, a former tech mogul of that era turned art collector and dealer, said his former colleagues were usually after big, glitzy names like Andy Warhol and Damien Hirst. “I think they were obviously so high-profile that all these galleries and advisers targeted them and it became a thing to check off after your fast cars and your palatial house, to have an art collection.”

For all the headlines heralding Groupon as the next Facebook, itself the next Google, Mr. Nye said he’s yet to see that type of collecting from today’s tech community. He believes this may be because we’ve yet to experience the unprecedented I.P.O.’s of the dot-com bubble, and because, to him, art simply doesn’t seem to be a major concern for contemporary start-up jockeys.

“It’s rare that people who come out of that culture have sophisticated tastes,” Mr. Nye said. “They’ve spent their lives in a basement looking at a computer screen.”

But the culture of technology companies has changed since the ’90s. With seemingly endless rounds of funding and more advanced methods of trading private stock, it’s not clear that the big I.P.O. cash-in will necessarily ever come for the companies that make headlines today. The type of technology that’s being developed is also different—it’s social, and creative. If e-commerce was the buzzword of the dot-com bubble, today it’s mobile devices and social networking, which means a different kind of tech mogul.

And you can’t expect today’s tech moguls to collect in the same way that anyone else does, let alone the way their predecessors did. For one thing, they rarely seem to use art advisers. Most advisers contacted for this article said they didn’t have any clients in the start-up world, and BJ Topol of Topol Childs Art Advisory wrote via email that the Silicon Alley clients she does have tend to collect differently. She described one who had come to her starting out with an interest in blue-chip artists who flipped after he met a few emerging artists personally. “Since those first few studio visits, this client has made a conscious decision to support younger artists exclusively,” Ms. Topol wrote via email. “These clients prefer to buy artists whose work is relatively unknown and haven’t yet been taken on by a gallery.”

Joanne Wilson, wife to star venture capitalist Fred Wilson and an investor in her own right, falls into this category. She’s written about her collecting on her blog, and regularly visits galleries herself. She eschews art advisers in favor of a more personal relationship with burgeoning artists, and prefers not to spend more than $20,000 on a piece. Over the years she’s become close with artists whose works she owns, among them Peter Dayton, James Nares and Eric Freeman. She’s enjoyed watching their reputations and prices grow over the years, though not because it’s any kind of endorsement of her own taste.

Manish Vora, a former Wall Streeter and co-founder of the ARTLOG website, which offers gallery walks and museum events aimed at drawing in new collectors, says that this attitude is common in the Silicon Alley types he’s met.

“I think it makes a lot of sense for venture investors to be interested particularly in young artists,” he said. “You understand that you’re investing in these creative people, who are really businesses, and only two of those 10 pieces that you buy are going have any value, and if you’re comfortable doing that on the business side you’ll be a lot more comfortable investing in art that way.”