Blow the trumpets and bang in your drum circle: the MSM have finally arrived in the form of Geraldo Rivera, who came down to Zuccotti Park Sunday morning to cover the protests for Fox News. Fox News! You can’t get any more mainstream then that.

The Fox anchor was immediately mobbed by Occupy Wall Street supporters who had just moments earlier been putting together a breakfast spread of bean sprout and cheese sandwiches (something that the news crews made sure to capture for B-roll). Mr. Rivera, looking not just a little like Dennis Farina, was more than happy to pose for photo opps (though he asked us to be in the picture with him…does that make us complicit with Fox?) and interviewed one protester about his cause before cutting him off mid-sentence.

But if Mr. Rivera was there to cover the story of Occupy Wall Street (which he admits he was two weeks late to), he was also there to be the story. A young man from Vice Magazine asked Mr. Rivera about the legality of what the NYPD did on the bridge. This was his response:

As he wandered to his next subject, someone shouted at the mustachioed anchor, “Get a job!”

While we can’t know for sure how a media outlet like Fox News will spin the Occupy Wall Street protests on air, we’re going to take a wild guess and say that the days of the “media blackout” will be a quaintly nostalgic memory in comparison. 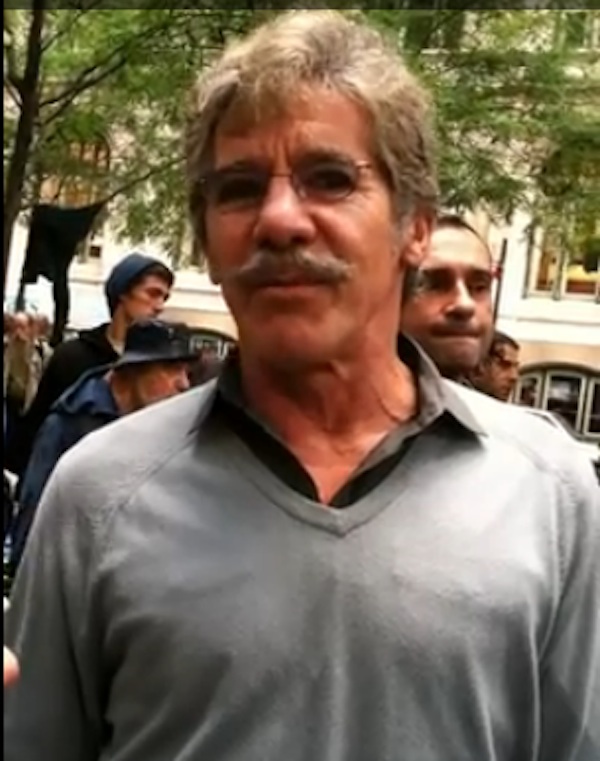