You know, maybe it’s because we have a soft spot for the guy (or his mustache), but this overwhelming mob mentality towards Mr. Rivera isn’t doing anyone any favors. No one is engaging the Fox News anchor on an intelligent level, like Jesse LaGreca did. Instead, the cameramen got B-roll of protesters frothing at the mouth and pelting god-knows-what (at the 2:00 mark) to send back to Roger Ailes. Then Fox News confirms to their viewers that the park is filled with the kind of drug-addled heathens that they’ve been told about. And this is how Mr. Rivera actually ended his broadcast on Sunday:

“Before I say goodnight, I want to end with a couple of statements here about what’s happening in Zuccotti park. The crowd is easy to mock. They are disorganized. They look funny. Some, like the person putting the paper in front of the lens are aggressive. But they have a real, legitimate complaint deep down and it is a message that I think will resonate eventually as people listen up. Thank you for being with us. We’ll see you next time.”

You have to admit that after watching that video, his message is kind of classy. Note to protesters: Booing and throwing crap is not a way to get the opposition to listen to you, nor win the support of viewers watching at home. If anything, you’re only helping Fox News’ cause. And now you’ve made Geraldo Rivera sad. For shame. 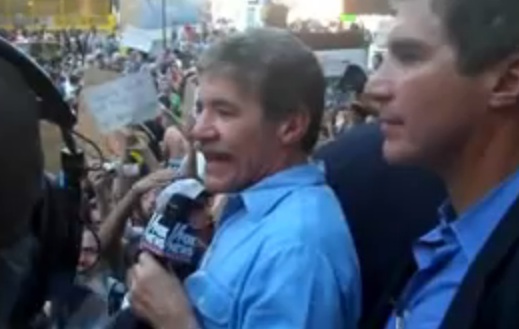