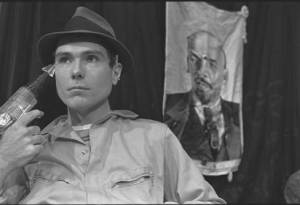 Yesterday, the writer and former Warhol scenester Glenn O’Brien posted the manifesto for his cable access show TV Party on his website. The manifesto originally ran in the first issue of Bomb magazine in 1981 and it’s held up remarkably well over the years. Occupy Wall Street-ers, take note! “SOCIALISM begins with GOING OUT EVERY NIGHT.”

You can read the whole thing here.

In passing, I mentioned Mr. O’Brien in my story this week about Work of Art, but as you’ll see from the manifesto those two shows really only have their format in common.

In America TV is the form of government. Nothing can be governed but people and TV has proved to be the greatest modern instrument for their control. TV PARTY presents and reveals ENTERTAINMENT as the ACTUAL form of GOVERNMENT. The institutions commonly called the government are merely the dramatic program, formalizing the results of TV’s direction of masses of minds.

The only cure is MASS LOCALIZATION. Independence for NEW YORK is just the first step in creating a DIVIDED STATES OF AMERICA and a DIVIDED NATIONS (D.N.) Culture begins with LOCAL PROGRAMMING. The failure of the National Networks is the same as the failure of the National Government. Local programming and fully empowered local government can make this city as good as it is in REALITY. But as it is our REALITY is constatntly assaulted by dreams and visions of an inferior quality. NEW YORK is America’s greatest center of culture, but this culture is nearly totally blacked out of radio and television communication. NEW YORK has dozens of the greatest bands in modern music but their music is not played on the radio. New York performers are not seen on television. Why should we import all of this “talent” so inferior to our own? We are not doing it. It’s being beamed in. The Networks are polluting our environment. TV PARTY demands local control of the Electromagnetic Spectrum. No image irradiation without representation!

Not so crazy, right? And if you have 50 seconds to spare, here’s a great TV Party bit featuring a special “mystery personality.”

Those who guessed correctly are no longer eligible for a prize, sorry.