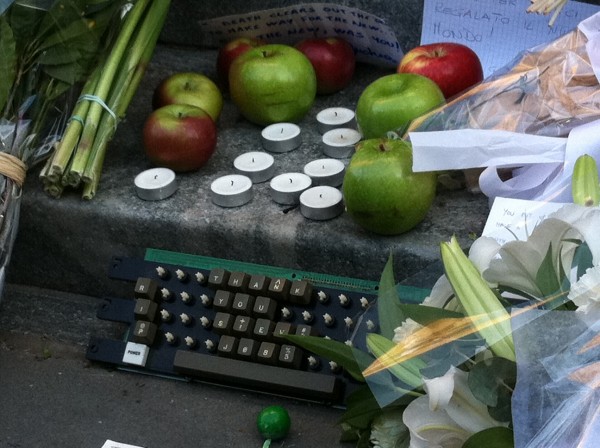 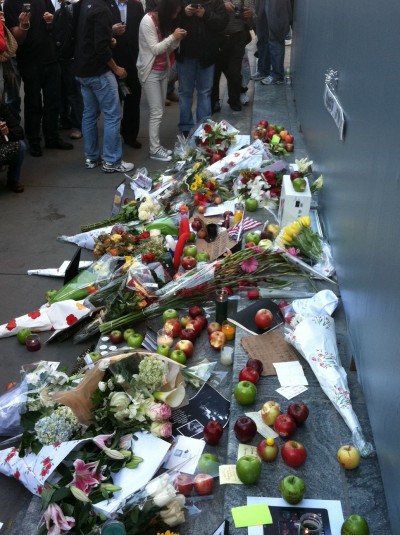 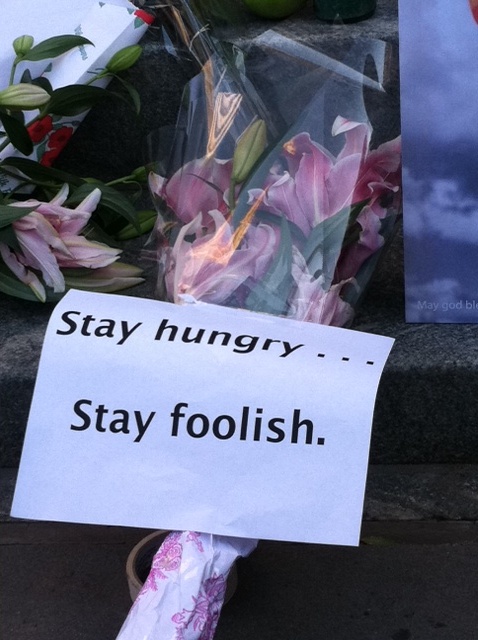 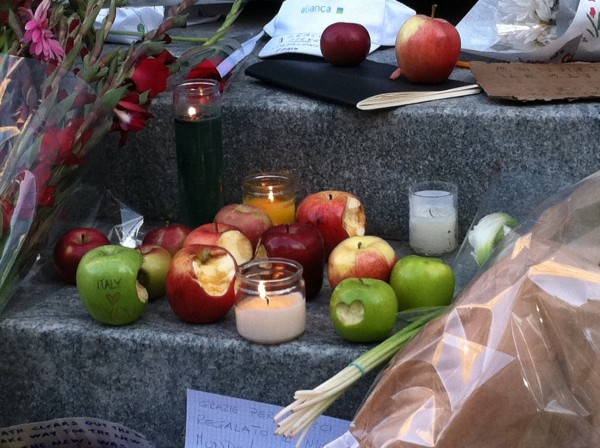 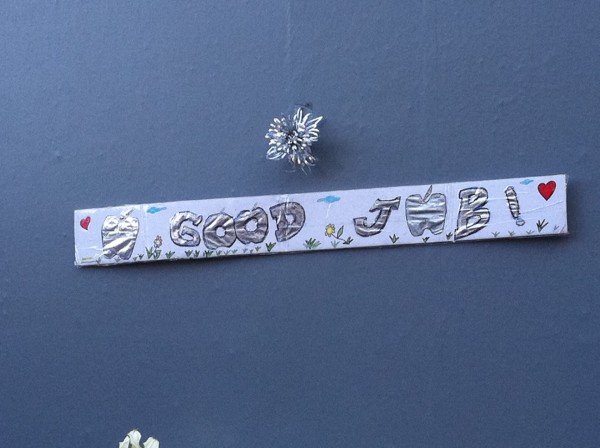 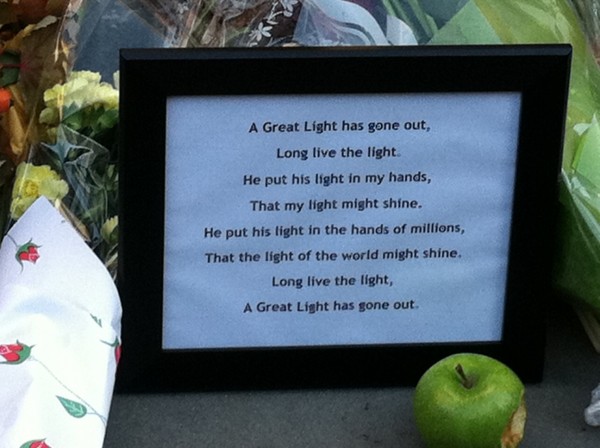 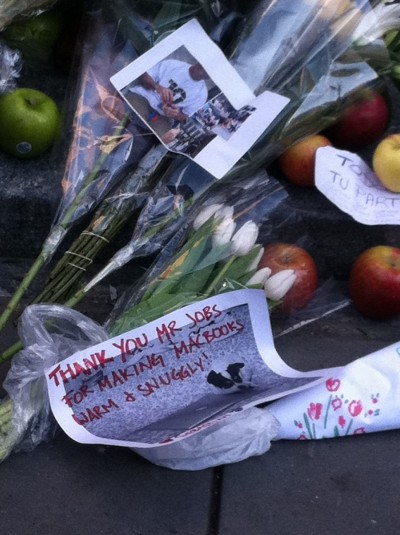 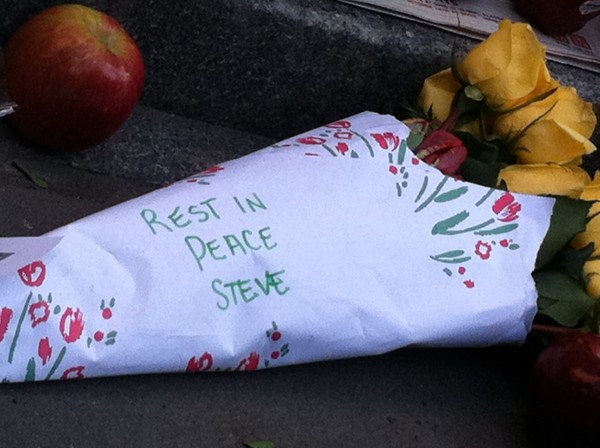 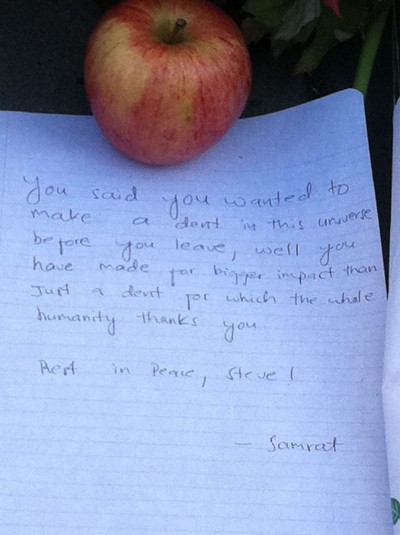 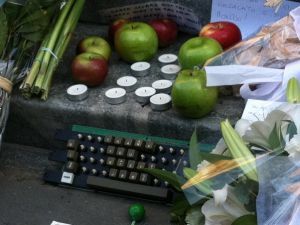 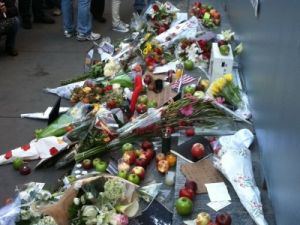 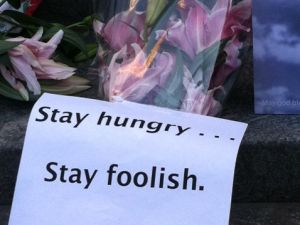 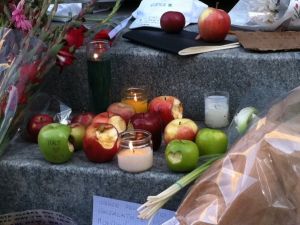 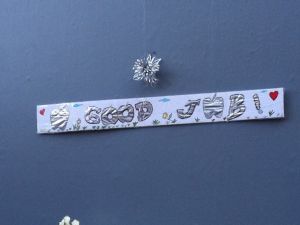 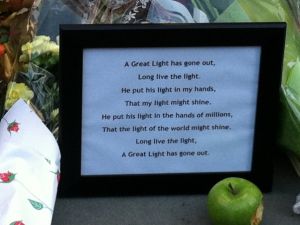 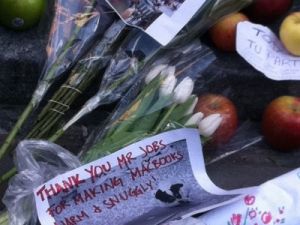 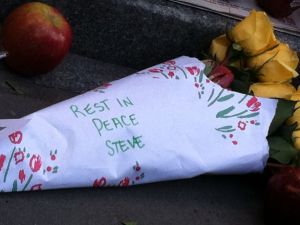 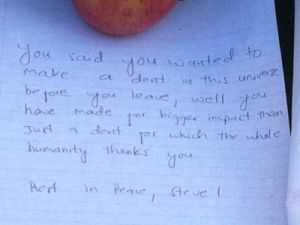 The Observer was walking down Fifth Avenue late this afternoon and happened to pass the Apple Store. Although the store itself, now sheathed in scaffolding, saw the normal hustle and bustle of buyers descend into its subterranean depths, another crowd had gathered outside to honor the memory of the company’s founder Steve Jobs.

A makeshift shrine had been erected overnight, with mourners leaving all variety of votive offerings. At least 30 apples (the edible kind) were arranged on the steps in front of the store, many with a bite missing, mimicking the tech company’s logo. Candles, flowers, notes, and even iPhones had been placed with care in remembrance of  Jobs. A steady flow of people stopped to observe the scene, taking pictures of the memorial with their iPhones.

The Observer asked one supplicant, Chris, who had added a page of stickers to the ever-increasing pile of objects, how Jobs had impacted his life. “I think it’s very sad and we kind of lost one of the greatest innovators I think of our generation,” he explained. “And personally, being in technology, he was an inspiration to me. He made me not settle with bad work, he really helped me.”

Many of the offerings were from out-of-towners. We spoke to one man, hailing from China, who left a personal note (in Chinese) at the site. “I am very sad. Steve Jobs was the father of Apple,” he said. He, like many other skeptics, expressed doubt that the brand would be the same without its creator at the helm. “I’m just wondering… whether Apple will invent more products for us,” he said. Because the world needs more Apple products. Really, it does.

“This ribbon is from Russia. You see, this is for memory of Soviet and Russian soldiers,” a woman hailing from the country of the bear explained through a thick accent. ” The Observer asked her why she decided to add to the shrine. “Because yesterday we heard about his death, and just one day ago we bought this iPod for son,” she said, brandishing the gadget.

People stood solemnly discussing the deceased tech giant in every imaginable language. One woman asked to borrow our pen as she tore out a picture of Jobs from The New York Times scribbling “MERCI, MERCI,” before adding it to the shrine. As expected, a slew of media outlets and professional photographers were on site, capturing the moment.

We noticed several people sitting in chairs, looking haggard. We thought perhaps they were mourners who had spent the night. As we approached them we noticed a sign. “We are waiting for the iPhone 4S,” it said. It appears that extreme Apple fans will indeed exist in the post-Jobs era.