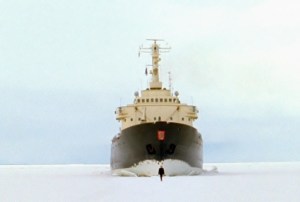 A still from the video "Nummer acht, Everything is going to be alright," by Guido van der Werve. (Courtesy Luhring Augustine)

Last year, Dutch artist Guido van der Werve rather impressively completed a roughly 30-mile run from MoMA P.S.1 in Queens all the way up to the gravesite of Russian composer Sergei Rachmaninoff in Valhalla, New York, in just over four hours, as part of the museum’s “Greater New York” exhibition.

Now Mr. van der Werve’s gallery, Luhring Augustine, has announced that he will attempt the feat again, on Nov. 12, as part of Performa, this time departing from the gallery, on West 24th Street, and he is inviting along a handful of runners for the experience.

Besides the glory of completing such a formidable run and the glamour of being involved in a performance piece by one of today’s interesting young artists, participants will get to take home a limited-edition T-shirt designed by the artist.

But take note! The gallery warns in its Facebook invitation, “Participation is at your own risks and participants are asked to sign a waiver beforehand.” Waivers, it turns out, are this season’s hot item: Carsten Holler’s New Museum slide requires the same.

And there is one twist: runners will need to bring a bouquet of chamomile flowers to set at the composer’s grave, as Mr. van der Werve did last year.

The Gallerist running club has been capping its group runs at 10 miles of late, but we are going to ramp up beginning today.