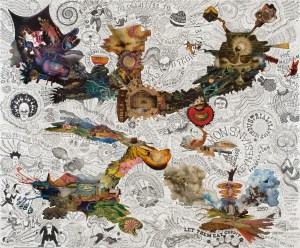 "Extraordinary Popular Delusions and the Madness of Crowds" (2011) by Dominic McGill. (Courtesy the artist and Derek Eller Gallery)

Making a painting requires faith. Think of a balloon: you don’t have to believe that it expresses truth or will improve the world, but the simple act of blowing it up implies, at least, the hope that it won’t break before you’re done. It’s a faith in the possibility of coherence—seductive, arguably false, and easily punctured with a pencil. Under the membrane, you’ll find innumerable perceptual facts, colliding but unrelated, forming a shifting, radically incoherent terrain. Two very different attempts to capture this chilly, honest world went on view last week in Chelsea.

Consisting of more than a dozen of her sandy, labor-intensive, wraith-filled drawings, Robyn O’Neil’s new show at Susan Inglett Gallery is nonetheless dominated by its the triptych that gives the show its title, Hell. A receding white mire is crossed and marked by long severed branches, black twisters, wide, shallow craters and thousands of tiny figures, many of them drawn separately and applied as collage. (According to the gallery’s count, the 14-foot-long triptych contains fully 65,000 figures and 35,000 separate collage elements.) The tiny men (I could find only one woman; there was also one goat-headed demon) are dressed in black tracksuits and white sneakers and are occupied in forming lines, committing acts of violence in twos and threes, exposing themselves and writhing in enormous piles. Rising out of these monads of malice are the same larger heads—seen from behind, with perfectly drawn, perfectly combed black hair—that appear in the show’s other drawings. One such head, this time in profile, rests on a pyre above another pile of figures. In the close foreground, a tall, narrow peak with two sharp points is a collage of tiny, shadowy, black-robed figures, like Klansmen in reverse. Still more heads, formed vaguely of black mist, float in the air.

It’s tempting to read this as a hell of artistic compulsion—the white paper that should be limitless instead disgorges the same few neurotic traumas over and over, only to swallow them up again. And are those little traumas—being hanged, poking or being poked in the eye with a stick, lying on the ground being peed on, being tripped, being cut in half—being performed by men, so that the larger faces are horrific sifting nations, or are we looking at a picture of the opacity of human identity? Are we made up of nothing but miniscule, unnameable moments of violence?

It’s tempting to look for metaphors, but the moral of any hell is that temptation must be resisted. Ms. O’Neil creates an incredible range of textures and shapes. And if a bodiless head, seen from behind, floating under a black cloud (Come All That Is Quiet) comes with any number of metaphors about the nature of perception, knowledge and reflection, its meaning is finally nothing more than the luscious, graphite texture of the hair.

While Ms. O’Neil makes her shadowy peace with confusion in principle, Dominic McGill confronts confusion in particular at Derek Eller Gallery. Extraordinary Popular Delusions and the Madness of Crowds, an eight-foot-wide collage and drawing, takes its title from a 19th-century book about bubbles, schemes and manias of the past, and its content from the delusions, lies and disingenuous greed of the present. Surrounding a colorful, ganglionic mass of deftly combined color pictures from old magazines—there’s a victorious Richard Nixon emerging from a plume of smoke emerging from an old-timey futuristic skyscraper; here’s a circuit board, and a factory—are hundreds of caricatures, assertions and quotations lettered and drawn with a cozy care and quiet humor that belie the intense outrage and focus driving them.

Larry Summers is an obese strong man wearing a singlet lettered “LET THEM EAT POLLUTION.” Block letters saying “THE COMMITTEE TO SAVE THE WORLD” cross through him from the left, while a smoggy stream reading “WE ARE NOW ALL FRIEDMANITES” circles out from his back. Ayn Rand, with a dollar sign on her forehead, grins in a penumbra of her soppier nonsense, while a row of fiery letters licking up from the bald head of her acolyte Alan Greenspan read, “Protection of the consumer by regulation is illusory.” “STAGFLATION,” “LET THEM EAT CREDIT,” “CRONY CAPITALISM” and “WE ARE ALL KEYNESIANS NOW” are just a few of the other words and phrases that catch the eye.