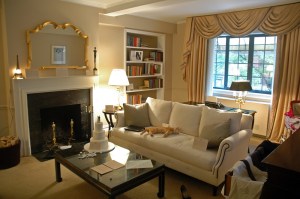 The Lowell Hotel, situated rather inconspicuously on the stately block of East 63rd Street that stretches between Madison and Park, is filled with antiques and orchids. Its rooms, to which guests ascend in a tiny, black-walled elevator, have fireplaces and terraces. As its general manager, Ashish Verma, took care to remind The Observer, it is often referred to as “a jewel of Manhattan.”

Beginning at the end of the day on Thursday, at midnight, there will be an unusual guest staying in one of the Lowell’s best-appointed suites. With its plush furniture and carpeting, space is at once cozy and spacious; it runs about $1,850 a night. The guest is an artwork called Room, an installation by the French artist Sophie Calle.

Room will fill the hotel suite with dozens of objects, including a bathrobe and a coffee cup, dice and a Polaroid camera. “What I am bringing is more or less a suitcase,” Ms. Calle, who turned 58 on Sunday, told us last week, sounding like any other smart, efficient traveler to New York. She was speaking to us over the phone from Paris, where she lives. Like any other smart, efficient traveler, she is shipping her more cumbersome objects in advance. One of them is a wedding dress.

Her artworks have always dealt in what might be called fraught objects, ones that become even weightier when she gives them a backstory. At the Lowell, short texts will accompany the objects, telling what appear to be autobiographical stories. The texts speak of childhood traumas, failed relationships. “I have always liked others to make decisions for me,” one says. “B. and I played a game: on even-numbered days he made the decisions, on odd-numbered days I did. When he left for the States he gave me a die to replace him.”

This is not the first time Ms. Calle has used a hotel as her medium. In 1981, she worked for three weeks as a hotel maid in Venice, examining guests’ belongings and reading their letters as she tidied their rooms. She snapped photographs and wrote journal entries to describe what she saw. Another artwork was born when a canceled meeting with a lover at a New Delhi hotel became the centerpiece of a complex installation called Exquisite Pain.

“I always go back to the hotel, in a way,” Ms. Calle told us quickly, with a faint hint of a French accent.

“There is a cliché in the hotel industry of the home away from home,” Ashish Verma, the general manager of the Lowell, told The Observer. “But it actually applies to us. Many of our rooms have fireplaces and terraces, and we are often referred to as a jewel of Manhattan.” It is also filled with luxurious antique furniture and orchids. “We are very aware of the fact that we are an extension of our guests’ lifestyle,” Mr. Verma added.