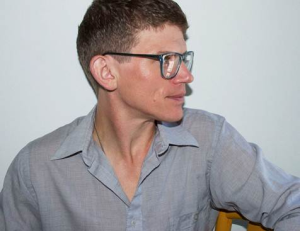 The Institute of Contemporary Art at the University of Pennsylvania in Phildelphia announced today that it has hired Performa associate producer Anthony Elms as its new associate curator.

Before joining the Performa biennial team, Mr. Elms previously served as assistant director of Gallery 400 at the University of Illinois at Chicago for six years.

“It is common to think of museums like the ICA as non-collecting, but that isn’t true,” Mr. Elms said in a statement released to press, noting that “they collect histories and experiences with the artists that have exhibited.” He added, “In that sense, I could not be happier to join a museum with the distinguished and energetic collection of the ICA.”

The release also gives us a touch of the curator’s personal interests. “Anthony is an enthusiastic drummer and record collector,” it reads. “He is also interested in ghosts.”

The ICA Philadelphia remains on the hunt for a director to replace Claudia Gould, who announced in August that she would leave the museum to lead New York’s Jewish Museum.

On a tangentially related note, the museum currently has a show of work by the German painter Charline von Heyl that we are really looking forward to seeing before it closes on Feb. 19, 2012.