“It is absolutely disgraceful that the Republican candidate for Senate would show such callous disrespect toward women,” said Lampitt, referring to Mitsch’s twitter feed from last April.

Lampitt and her running mates, Beach, and Assemblyman Lou Greenwald (D-6) objected in particular to the following Mitsch tweets:  “Your new survival philosophy toward women should be ‘pay, play, now get the F-k away’” and “Tell your women they can’t talk to you but they can moan.”

Mitsch told PolitickerNJ.com that the offerings were dry humor, but Lampitt was not amused.

“Let me be clear,” Lampitt added, “nothing short of Mr. Mitsch’s immediate resignation is acceptable. We do not accept his excuses, nor do we accept an apology.  This is not a laughing matter. Mr. Mitsch’s comments are just plain wrong.  He must resign immediately.”

Beach and Greenwald likewise called for Mitsch to check out of the race. 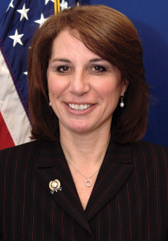