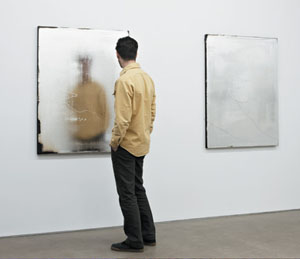 The tone of the recent New Yorker Talk of the Town piece about Jacob Kassay portrayed the 26-year-old artist as aware of the hype surrounding his work, but largely immune to it, viewing it as something of a benign annoyance. (“I always thought of this work as much more boring than people were taking it for,” he says in one quotation.) A new interview with Art in America shows that he’s actually a bit more annoyed with the hype than he let on in The New Yorker.

The relevant paragraph comes at the very end of the piece:

“One venue where Kassay has not been choreographer is in the reporting of the financial aspect of the work. Kassay’s paintings sell on the secondary marker for six figures, and art journalists have spilled a lot of ink, digital and otherwise, reporting this. The attention on the part of journalists to this aspect of his career vexes the artist. ‘It’s stupid. How boring. What kind of bully does that to a 26-year-old?’ Kassay asks.”

Fair enough, though we’d be remiss if we didn’t point out in a blog post like this that his star really has risen with newsworthy rapidity and is a legitimate story. The New Yorker piece also brought up the idea that at this young age Mr. Kassay already has a “market” to protect, and may not be able to evolve as an artist because of the established taste of his buyers, but Art in America shows him to be fairly unconcerned with those issues.

“The word for rehearsal, in French, is the same word for repetition: repetition,” he says “And I thought, ‘well that’s interesting. I work in a very repetitive way. All the paintings are the same friggin’ size: perfect.'”