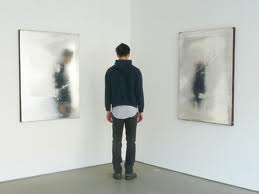 Jacob Kassay, the young artist who quickly became in demand when his canvases started fetching ten times their estimate at auction last year, continued his upward trend at Phillips de Pury’s contemporary evening sale in London yesterday. The piece in question, estimated at £50,000–£70,000 (the same range as one of his works included in Sotheby’s Contemporary auction in London happening today) sold for £163,250 ($256,000), more than twice its high estimate.

The piece is untitled and displays Mr. Kassay’s signature chemical treating process that produces a silver sheen as it burns the canvas, making it as opaque as it is reflective. Here is the dramatic description from the Phillips catalog:

“The mirror-like monochrome surface reflects its surroundings including the viewer without whom the piece – in a Duchampian way – would never be complete. Light, colour and movement are the main elements comprising a surface not capable of an accurate reflection but of exposing the suggestive qualities of abstraction and image. It is with irony that such a technique, redolent of the pre-digital era of photography, draws us that much closer toward abstraction.”

Is this high figure a foreshadowing of the Sotheby’s auction? The Kassay bubble is expanding, folks. Depending on how tonight goes, Mr. Kassay is shaping up to be the young star of Frieze week. His first museum show, at the Institute of Contemporary Arts London, also just opened to the public yesterday.

UPDATE: The hammer just fell on another untitled work by Mr. Kassay at Sotheby’s evening sale. The piece sold well above its high estimate of £70,000, with a final price after the buyer’s premium of £145,250. According to their provenance, both works were property from private collections, which means Mr. Kassay will not see any money from either sale. Ah, the pains of being a young artist!