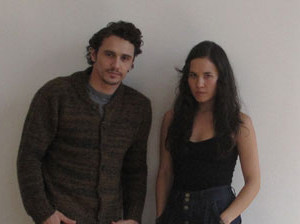 We first heard that James Franco and Laurel Nakadate would be collaborating on a Performa commission over the summer, at an opening for Mr. Franco’s solo show, “High/Low, Rob Lowe,” at Asia Song Society (which turned out to be shortlived due to flooding in the space’s basement). At the time, Mr. Franco described the show as “very participatory.” Now we have more details on the piece, called Three Performances in Search of Tennessee, a three-part project that involves “a séance and karaoke-style auditions.”

The show is being co-comissioned by the online exhibition space, Paddle8, who will also be streaming portions of it on their web site.

In part one, Ms. Nakadate and Mr. Franco will lead a group in a séance to communicate with Tennessee Williams through a Ouija board. They will communicate the author’s messages to an audience, who will respond accordingly.

Part two involves female actresses auditioning for the part of Laura in The Glass Menagerie. Their lines will run along the bottom of a life-sized screen that will project Mr. Franco playing the part of Gentleman Caller.

For part three, male actors will audition for the part of Tom in the same play. As they each read for the role separately, Mr. Franco and Ms. Nakadate, playing the roles of directors–though also, you know, being the directors–will interrupt the audition with notes.

The performance will take place on November 13 at Abrons Art Center. Tickets cost $30.