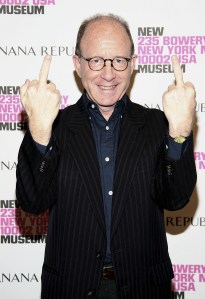 Mr. Saltz makes the case, as only he can, that if the show is slightly offensive to some viewers’ sensibilities, “This isn’t a billionaire collector flying a millionaire artist to Venice to party down on a private yacht. This isn’t a billion dollars spent at auction for pieces of drivel.” Which is true! He also says that his wife, New York Times art critic Roberta Smith, supports his television career completely and has also never seen the show. Here are his thoughts on the art created on the show:

Geez, you’d think the guy was paid to make compelling arguments or something! Mr. Saltz also offers some insights into the nature of attraction and how it differs for men and women. Work of Art, season 2 debuts tonight.