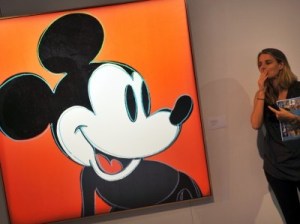 A Sotheby's employee with a Warhol in Hong Kong (Photo courtesy of Getty Images).

Reached for comment today about the Andy Warhol Foundation’s decision yesterday to dissolve its authentication board, Foundation president Joel Wachs downplayed the potential implications of its decision, saying that the Warhol authentication process would now follow the same path it would for any other artist. He added that the foundation’s extensive catalogue raisonné work would take up any other slack.

“There are over 100,000 works by Andy Warhol and in last 16 years that the authentication board’s been in existence only 6,000 or so have actually gone before the board,” Mr. Wachs told Gallerist. “The authentication board only gets a work if an owner wants to sell it, while the catalogue raisonné is an ongoing project on which we spend more than a million dollars a year in research, so it’s a very different process, one that is completely focused on scholarship as opposed to the market.”

“We’re not here to serve any collectors’ financial interests,” he added.

An artist’s catalogue raisonné aims to comprehensively list every work by an artist and naturally affects that artist’s market in a way similar to how an authentication board might—certain works are included, others aren’t. Warhol’s catalogue raisonné still has three forthcoming volumes focused on the 1970s, four more from the 1980s, and two dedicated to drawings. The foundation employs six people full-time to research the books and, Mr. Wachs said, “we will probably use the expertise of former authentication board members and other scholars to supplement that.”

Not all works in the current Warhol catalogue raisonné have been authenticated by the board, as many Warhols, such as those in museum collections, are unimpeachable by the artist. There is, however, no way that a questionable work, or one that was marked “denied,” by the authentication board, as Joe Simon-Whelan‘s was, would make it into the catalogue raisonné.

“I’ve worked with catalogue raisonnés and always council them not to call themselves an authentication board,” he said, “not to say that they are the end-all, be-all of determination.”

“I think it was probably started because before people would just go to one or two people who were friends of Andy’s, like [Warhol manager] Fred Hughes or something, and ask their opinion,” Mr. Wachs said. “I think the idea was that there should be something more orderly and more scholarly to do that, but I don’t think anyone ever anticipated that it would be abused in the way it was. Unfortunately we have a litigious society and a judicious society that allows these things to happen, where cases that have no merit and are eventually thrown out can cost you millions and millions of dollars and that’s something I don’t think anyone ever thought about when they were starting something like this.”