Mr. Goulian was matched for a seven-minute reading in the first round against Emily Gould, who read a new piece about a girl in Kansas who had kind of a shitty boyfriend and didn’t like to jog (but did it anyway).

The decision for who moved forward in the Deathmatch was put to New Yorker editor Ben Greenman, who judged on literary merit and who took copious notes throughout; comedian Jessi Klein, who judged on performance; and Videogum editor Gabe Delahaye, whose area of expertise was “intangibles” and whose judging included long riffs on Taylor Kitsch, bellbottoms, and the new article about Finding Nemo director Andrew Stanton in this week’s New Yorker.

“You look like the right amount of sexy-creepy,” Ms. Klein said after Mr. Goulian’s performance. “Like Jordan Catalano meets someone on a sex-offender registry.”

Host and LDM founder Todd Zuniga, who looked impressively cute with that kind of shaggy haircut that only boyish men like Ricky Van Veen can pull off, was coming straight from Montreal, where he had performed the night before. Today he’ll be in San Francisco.

“I feel a little bit like Conan O’Brien describes in his Can’t Stop documentary,” Mr. Zuniga told us. “I get excited, and then halfway through the tour I feel like ‘Not this again,’ but as soon as I see the performers I get excited all over again.”

Before the show, we asked Ms. Gould if she could tell us what she’d be reading.

“Not unless you can Mind-Google it,” she said.

We attempted the Mind-Google technique, which Ms. Gould interpreted as us “giving (her) a mean look” as she told us later in the evening. BetaBeat darling and front-wedgie taker Matt Langer showed up to cheer the blogger/authoress on.

“I know that everyone here is excited about The Art of Fielding, so there isn’t much room for another sports novel,” Mr. Beauman told the audience. He may have been right: his reading lost to Ms. Kine’s.

The finale involved Ms. Kine and Mr. Goulian in a literary spelling bee, which personally sounds like our worst nightmare (Houellebecq? Palahniuk?), and went on for an impressively long time before Mr. Goulian finally defeated his competitor.

Later he and Miss Gould conspired on how they would (hypothetically) take home Ms. Klein, before the Emily Books founder (carrying an N+1 tote bag) decided to call it an early night and head back to Brooklyn.

We left soon after, so we have no idea if Mr. Goulian had any later success with Ms. Klein, the comedian who had judged him as an attractive sexual predator. 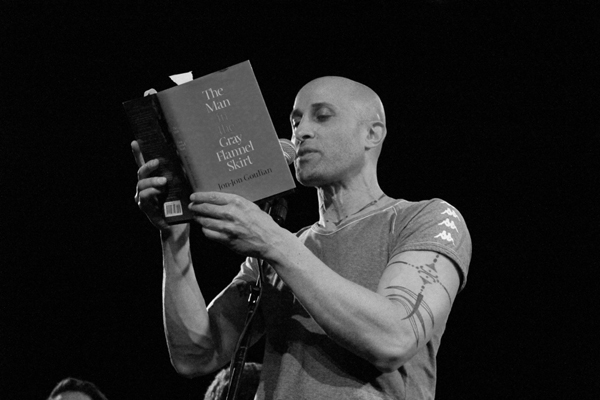