We here at the New York Observer don’t like to pat ourselves on the back too often (it’s definitely uncouth, and we’re nothing if not couth), but we couldn’t help feeling a surge of pride when Jon Stewart used the video we uncovered of Daily Kos’ Jesse LaGreca telling off a Fox News producer during  his Wednesday night broadcast.

Of course, we’re only noticing this video now because unlike the “media-mocking-the-media-mocking-the-protesters” angle that Comedy Central took, we were actually down at the Megamarch on Wednesday and forgot to TiVo Mr. Stewart. Again, not patting ourselves on the back or anything.

However! We would like to challenge Jon Stewart and Stephen Colbert — both of whom are located in New York — personally go down and cover the protests live. We’d also love to see them have Mr. LaGreca on their show. That is, if the political writer is willing to do it. 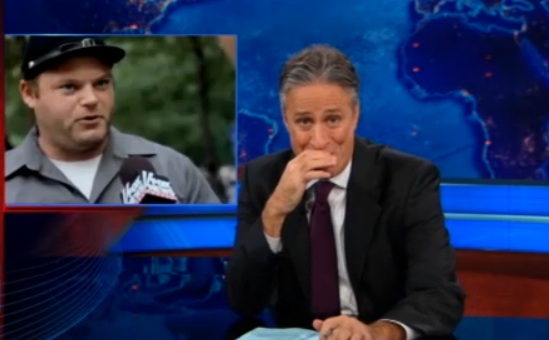