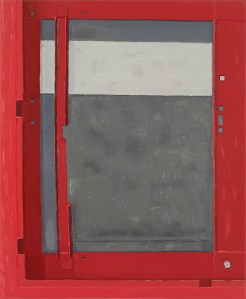 Josephine Halvorson makes small artworks that have a huge impact. Why do viewers stop dead in their tracks in front of her pieces—humble oil paintings that are descriptive close-ups of such unlikely subjects as a machine valve, crumbs in a cake pan or the blocked window of a salt-water taffy shack—and then linger there?

To some, this reaction might seem puzzling, because—although Ms. Halvorson, 30, at times resists the label—her work is realistic, at the very least in the sense that she sets up her easel in front of real things in the physical world and paints what she sees. A new exhibition, her second solo show at Chelsea gallery Sikkema Jenkins, opened last Friday.

Her work is so direct—there’s no intellectual or ironic overlay, no sexual or political provocation, no art world cleverness—that it makes her realism new and fresh even though it rests on an ancient tradition that Ms. Halvorson draws on freely. “I look at Roman frescoes and still-lifes and the answers are right there, all the way up to Wayne Thiebaud,” she told The Observer in her Brooklyn studio.

Amid the cacophony of the contemporary art world, a quiet, unmediated experience of paint and object comes across as radical. Then there’s the sheer beauty of it—the melding of the sensual, creamy paint with the thing represented, the sophisticated compositions that play off the shape of the canvas, and the rich color. Her loose brushstrokes make emphatically clear that she is not creating an illusion of reality. “I don’t make pictures [of objects],” she said. “I make paintings.”

In a highly unusual practice, Ms. Halvorson is an itinerant artist who paints on site. “To me, working in the studio is like immaculate conception,” she said. “Being outside the studio is like meeting a partner and giving birth.”

So she goes on the road—to a rail yard in coastal California, a plastics factory in the U.K., an abandoned mining site halfway to nowhere in Death Valley—toting her portable easel and the ironing board she uses as a palette. If you look closely you can sometimes see caught in the oil paint flecks of insects and other chance aspects of the environment she painted in.

Her rejection of the usual New York white-cube studio tradition—“It was all about ideas. I need something to engage with to make art”—is just one of the things that sets Ms. Halvorson apart. She also completes an entire painting in one day, neither making studies beforehand nor modifying it afterwards. “I want it to be really immediate and fresh in my mind how I’m encountering this thing,” she said.

In interviews at her studio, which she uses for storage and to prepare canvas and during a walkthrough of her show at Sikkema Jenkins, she showed a disarming modesty and a clear delight in painting. “It’s got to be fun,” she said. “I’m not embarrassed about pleasure.”

Ms. Halvorson grew up in Brewster, Mass., the only child of a sheet-metal worker mother and a blacksmith father, who taught her, she said, to “trust in the physical, the hand-made, the things that humans can’t really destroy.”

A hand-operated machine that her parents still use is just one of several machines depicted in the show. “Imagining through looking what it would be like to operate machines, that’s exciting to me,” she said. “If I had another life I would become an electrical engineer or something.”

As a teenager, Halvorson worked in a candy store and a bed and breakfast to pay for an art class in Provincetown, and she attended Cooper Union—the only art school she applied to­­—because it was free. “I didn’t have a college fund so I was nervous about what that meant for myself and my family.” After a year in Vienna as a Fulbright scholar, she went on to earn her M.F.A. at Columbia.

She started painting on site only four or five years ago, when she had a residency in Paris. There’s “no better place to have a studio practice” than New York, “and nothing is more embarrassing than having a French easel”—a portable easel with collapsible legs. “It’s like a leisure thing, or you aren’t professional. There’s something kind of dorky about it.”

But in France “people don’t even bat an eye” at someone painting outdoors. She didn’t show her work to anyone for almost a year and, she explained, “something I considered almost impossible in New York all of a sudden became very easy.”