TRENTON – With a lineup of Republican candidates behind him, Gov. Chris Christie centered the court fight over pension and benefit reform on the mantle in his first major campaign event.

“They are not kings and queens in black robes,” Christie said of the Supreme Court and Superior Court judges who are benefitting from a court overturning the benefit hike due to Constitutional protections.

Over 50 candidates and officials stood behind the governor at the War Memorial in Trenton, but huddled up next to Christie were only two candidates and leadership, Minority Leaders state Sen. Tom Kean, (R-21), of Westfield, and Assembyman Alex DeCroce, (R-26), of Parsippany.

Having not made many promises about the likelihood of his candidates claiming seats in November, Christie today said, “We’re going to make history two weeks from today.”

Polistina said the judges – who receive an average $107,000-per-year pension – were ready with a legal challenge “before the ink was dried on these newly (passed) reforms.” “This simply is not right,” he said. “No public employee should be exempt from this legislation.”

In the background were more than 50 candidates in support of a Constitutional amendment if need be, Christie said, including state Sens. Diane Allen, (R-7), of Edgewater Park; and Dawn Marie Addiego, (R-8), of Evesham; Assemblymen Dave Rible, (R-11), of Wall; Gary Chiusano, (R-24), of Augusta; Scott Rumana, (R-40), of Wayne; Joe Malone, (R-30), of Bordentown; and Sam Thompson, (R-13), of Old Bridge, who’s making the leap for the upper chamber.

“The Democrats always say they’re for the little guy,” DeCroce said, and yet they’re silent on the “elitist benefits of an exclusive group of public servants.”

“Today we have a David versus Goliath taking place,” he said. “David is the taxpayers of New Jersey.”

Christie didn’t pass up the opportunity to criticize Mercer County Assignment Judge Linda Feinberg, who decided the case, as misinterpreting the no-change-to-salary provision for judges.

“Everyone seems to understand that salary is what you get paid in your paycheck,” he said, “except for Judge Linda Feinberg.”

He reiterated that she made the decision “protecting her own pocketbook (and) to win a popularity contest in the lunch room.”

The total cost of judicial retirement benefits is $2.3 million for the state, with contributions only covering $59,300 of that tab – “the definition of a broken pension system.”

While a recent poll said voters are most concerned with jobs and property taxes, Christie said the reforms – and the court battle over the judicial portion of them – address squarely the overtaxation problem.

“I don’t agree with the math that (the reporter) put forward in his story,” Christie said. “(The state contribution is) not the biggest element,” he said. “It’s the cost of these benefits.” Another large contributing factor is the elimination of cost of living adjustments. 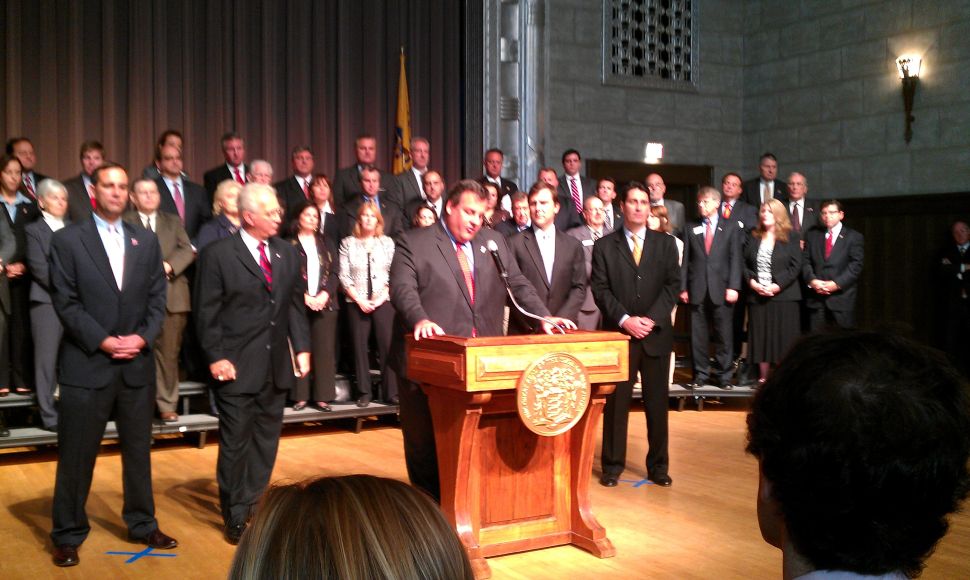