Kim Kardashian—Brooklyn resident would-be and The Last Great Hope of Kings County—is ending her seemingly unbreakable fairy-tale marriage to basketball player Kris Humphries after the lengthy 72-day celebrity bonding, the likes of which haven’t been seen since Elizabeth Taylor and Richard Burton, or maybe more appropriately, that time Brittney Spears eloped with that guy in Vegas who she knew from high school or whatever. It has affected society to the extent that there is a vigil being held outside the SoHo retail operation of Ms. Kardashain (whose star was propelled to fame by an outsized derriere and a sex tape with Brandi’s brother, Ray-J).

Yes, this is happening. From the blog of Buzzfeed’s Tanner Ringerud, whose office neighbors that of Ms. Kardashian’s store DASH:

My afternoon. Candlelight vigil outside DASH to mourn Kim Kardashian’s divorce. We were out there for an hour singing Beatles and Coldplay songs.

There is a picture: From Buzzfeed’s TwitPic, the sad notes they left: Now, granted, this is Buzzfeed, a website known for aggregating Internet memes and who are totally suspect for coordinating this kind of internet pranksterism with something like, say, a Craigslist ad to corral people into participating with them.

In moments like this, the famously foreboding quote which opens Kurt Vonnegut’s Nazi propaganda-spy satire Mother Night comes racing into already seared minds: “We are what we pretend to be, so we must be careful about what we pretend to be.” The odds that there are people so mentally disturbed as to be legitimately upset by this news—the inevitable conclusion of a brilliantly crass, cynical, and wildly successful commercial experiment—are disconcertingly real. To this extent, one might care to consider the philosophical implications of legitimately egging them on. 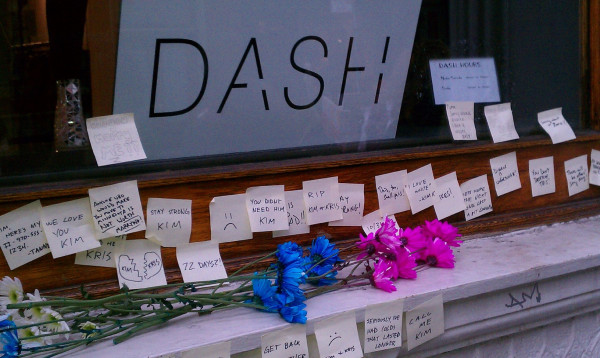 Filed Under: Politics, News & Politics, New York, Kim Kardashian, celebrities, Divorces, Occupy Everything, We Are The 99%