PARAMUS – Rivals rip-sawed into one another tonight in Bergen, as state Sen. Bob Gordon (D-38) complained that the GOP team was “winging it” and relying on sentimental talk about their families while GOP Senate hopeful John Driscoll said he would “talk about my family until the day I die,” and pinned the state’s property taxe woes on Democrats.

One of two glamour legislative district races this cycle, tonight’s LD 38 event drew a small crowd out of a dreary rain to occupy seats in a room flickering in fluorescence.

It ended in a bear hug, but not before some crackling exchanges.

A League of Women Voters banner hung across the lectern inside the technology building at Bergen Community College and a chat-up started amiably enough until a question arose about cancer.

Gordon said he was happy to hear that his Republican opponent, Bergen County Freeholder Director Driscoll, is concerned about cancer.

But, “You make a living selling cigarettes, which promotes cancer,” Gordon told Driscoll, in the first stinging jab of the forum.

“That’s my job,” said the Republican tobacco salesman. “At least I don’t abstain from votes.”

Gordon sat on one side of the podium with his Democratic running mates, Assemblywoman Connie Wagner (D-38) and Maywood Mayor Tim Eustace.

Moments after his first rejoinder, Driscoll went after Gordon unassisted.

“I don’t sit on committees where I have to abstain on every solar panel vote because I have a conflict of interest,” the Republican challenger told the incumbent senator.

Gordon front and centered his advocacy of the millionaire’s tax vetoed and overridden by Gov. Chris Christie.

“We’re talking about one and a half cents on each dollar of income beyond the first million dollars,” the senator said.  “That would get us $600 million in revenues, which would have allowed us to fund our constitutional education obligation.”

When it came to the fracking question, Driscoll admitted he was “the farthest thing from a scientist,” and he watches Battlestar Galactica so associates the process with a “dirty word.”

“A lot of this is being done out of the state – we have more pressing issues,” said the candidate.

This time, Wagner went on offense.

“I’m really taken aback by that answer,” the assemblywoman said in reference to Driscoll’s offering. “It’s a harmful process. It destroys our drinking water and health and it is a concern in New Jersey.”

Alonso spoke up next on the issue.

“We have to try to become less dependent on energy sources from other countries; I want to keep an open mind,” the Republican said.

Gordon said he favors a five-year moratorium on fracking.

Moments later, Driscoll lunged at Gordon, charging him with flip-flopping on the gas tax. Driscoll said Gordon opposed it, then said later at a press conference that he hadn’t ruled it out.

“I would not support a gas tax,” said Gordon. “It would have a devastating effect on families.”

Gordon said he supports bonding backed by the governor.

The incumbent shortly thereafter worked in a jab on Christie when it came to the flood question.

“The governor made substantial cuts in municipal aid,” Gordon said. “I think what you’re seeing are Department of Public Works not being able to clean out the drains as they used to.”

“I’m glad to see my opponent after eight years sees we have a flooding issue here in Bergen County,” the challenger said in reference to legislation championed by Gordon.

Alonso backed him up.

“It’s disingenuous for our opponents to be coming up with this (flooding) legislation now,” said the GOP Assembly candidate.

The newcomer to the Democratic ticket, Eustace highlighted his experience as one of only a handful of unpaid mayors in the State of New Jersey.

On the question of marriage equality, the GOP went as far as backing civil unions, while the Democrats support gay marriage. The GOP criticized the incumbent Dems for the way they attempted to consolidate Teterboro, arguing they should have had better public hearings before attempting changes. Wagner acknowledged if she did it over again she would have had more and better hearings, but stood by the Democrats’ as-yet unsuccessful efforts to consolidate Teterboro.

Driscoll wrapped up Gordon in an embrace at the finale. 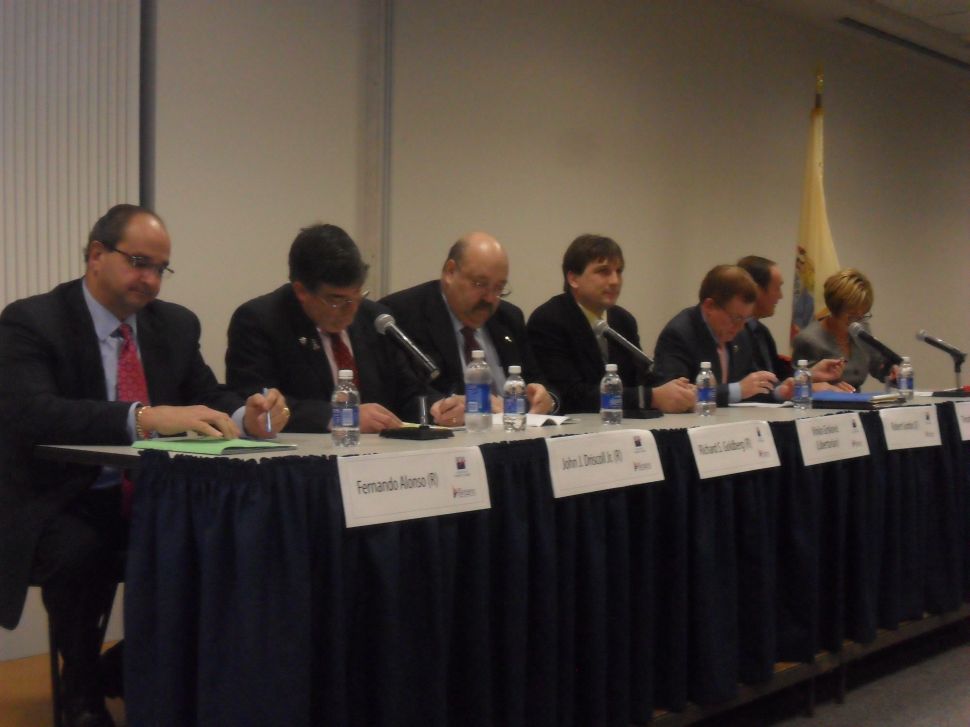