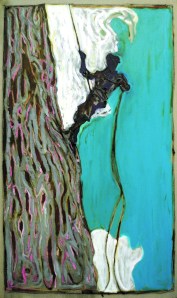 “There are people who have said to me, ‘They’re not going to swallow you in the art world until you’re dead,’” the musician, poet, novelist and artist Billy Childish said. “The chance that it has been moved forward 20—or 30 years, hopefully—is something that I never expected.”

Mr. Childish, 51, was speaking on the phone from Chatham, England, where he was born and still lives, and he was discussing his upcoming painting show at the Lower East Side branch of the Lehmann Maupin gallery, which opens Nov. 4. He has had a handful of shows in Europe, but this exhibition will be his first at a commercial gallery in New York.

These days, many visual artists are multitaskers. They write, they make clothing, they work in multiple mediums; art’s expanded field has made experimentation and cross-disciplinary practice not just an attractive option, but de rigueur. Which makes Mr. Childish inadvertently prescient: he has been at it for years. Not that it’s been easy.

“Really creative people are not liked in literature, in art or in music,” he said. “They tend to be excluded, and the reason being that they’re not containable and they’re pains in the ass. I’m one of those people—uncontainable and a pain in the ass.”

What from all appearances has certainly been uncontainable is Mr. Childish’s output. Since the late 1970s, he has completed more than 2,000 paintings, published more than 50 books of poetry and written five novels. He has run a printing press and a record label, and he has played a supporting role in many of British contemporary art’s major events.

But he is best known as a musician. He has released more than 110 records with a variety of post-punk, blues-inflected bands since the late 1970s with monikers like the Pop Rivets, Thee Milkshakes, Thee Mighty Caesars, Thee Headcoats, the Musicians of the British Empire and the Buff Medways.

“In the 1990s, I think I must have seen Billy’s bands play more than 100 times,” British-born curator Matthew Higgs told The Observer, “and I will say without hesitation he was the best front man I have ever seen.” Mr. Higgs, 47, presented the artist’s work at the White Columns alternative space in the West Village, where he is director, and is curating the Lehmann Maupin exhibition.

“They wanted someone who has some history with me to try to tell this very big story without confusing people,” Mr. Childish said. He and Mr. Higgs have been friends since the early 1990s, when the painter Peter Doig introduced them. Messrs. Doig and Higgs co-curated a show of Mr. Childish’s work at London’s nonprofit Cubitt gallery in 1993, the very first show that Mr. Higgs ever produced.

“It was the first stirrings of the YBAs,” Mr. Higgs said, referring to the group known as the Young British Artists, who were gaining fame at the time. “The work Billy was making was very different.” As YBA Damien Hirst began making his first sculptures with live animals and carcasses—a 1990 work consisted of a white box in which maggots fed on a rotting cow head, eventually growing into flies—Mr. Childish was looking to painters of the late 19th and early 20th centuries.

That work, Mr. Higgs said, “was very influenced by German Expressionism. There was a very strong line; it was almost a painted version of woodcuts.” He painted pastoral scenes in long strokes and bright colors, recalling the work of Vincent van Gogh and Edvard Munch. Sometimes a silent solitary figure appears in these landscapes, wandering through them.

“Both Peter and I knew Billy’s music, art and writing,” Mr. Higgs told us, “but his painting simply wasn’t as well known.” And yet that had been the artist’s first passion. In his youth, he painted at home and often took trips to the museums in London, where he developed unfashionable tastes, leaning away from conceptual and abstract work. “I would look at the Rothkos, and I found them completely depressing and uninteresting,” he said.

After dropping out of school at 16 to work at a dockyard as a stonemason, Mr. Childish continued to draw, but, having no credentials, he had to fight his way into art school, first at a local college. “I was very unimpressed by art schools and art teachers telling me what to do,” he said. “I came from an educational background where we didn’t listen to teachers at all. We were just dockyard fodder.”