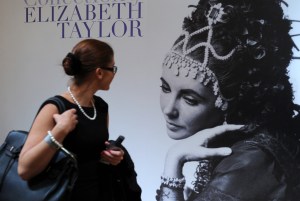 A poster advertising the show in Moscow.

Tickets are now on sale to see the Elizabeth Taylor jewelry collection, which winds down its worldwide tour in New York ahead of a December 13 auction at Christie’s in Rockefeller Center. From December 3 until that date, the jewels will be on display at the Christie’s headquarters, but a peep doesn’t come for free—the auction house announced today that tickets cost $30.

That is more than a ticket to the Museum of Modern Art, which is $25, and also more than the $20 that the Los Angeles Museum of Contemporary Art charged when it hosted the exhibition, a partnership that Los Angeles Times critic Christopher Knight lambasted in a recent column. (The museum and auction house shared the revenues, and after selling out of $20 tickets, added special $50 tickets for Friday and Saturday night viewings.)

All together the collection is expected to bring in $30 million at auction.