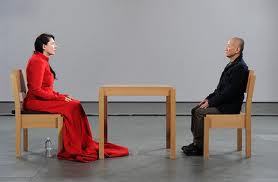 "The Artist is Present."

A truncated version of Marina Abramovic’s “The Artist is Present” exhibition, shown in 2010 at the Museum of Modern Art, traveled to collector Dasha Zhukova’s Garage Center for Contemporary Art in Moscow. Forty-seven Russian artists were trained by Ms. Abramovic to stage live re-enactments of some of the artist’s past works. Ms. Zhukova, if you’ll recall, recently launched The Greatest Magazine in the History of Mankind. It is called Garage. It is not about Garages.

The Moscow Times ran a review of the show (thanks to In the Air for calling our attention to this). It reads as if the writer had never been exposed to performance art before, which we suppose is entirely possible. Ms. Abramovic is referred to casually as “a Yugoslav performance artist.” We are also told “one of the most notable aspects of the show is its interactive nature.” The author concludes “despite the strangeness, nudity, and wildly dangerous acts, there is something magical about performance art.”

The final take-away message here, however, seems to be that the best aspect of the show deals with efficient time management. Ms. Abramovic was around only for one week, for three hours a day, staging the centerpiece of “The Artist is Present,” in which the artist sits in a chair and stares at audience members sitting across from her (remember that in New York people waited around for hours to take a seat with Ms. Abramovic). The writer quotes the artist as saying that in the performance “time stops.” The article continues:

“If such a time commitment seems a bit ambitious, it may be better to just accept an old joke retold by Abramovic: ‘How many performance artists does it take to fix a light bulb?’ Answer: ‘I don’t know. I was only there 6 hours.’ Save yourself a few, OK, many, hours and experience the magic in highly condensed form at Garage.”

Ah, yes. This art is magical. But I’ve got places to be, people to see. In fact, I’ve got to get out of here right now.