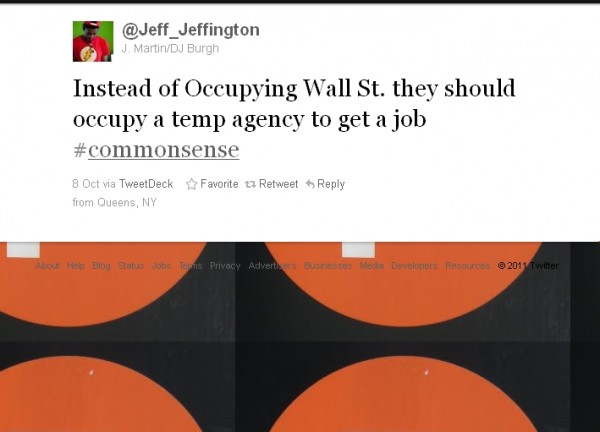 Another tweet: My debit card is far past gone. Gotta wait til next week for the replacement x.x 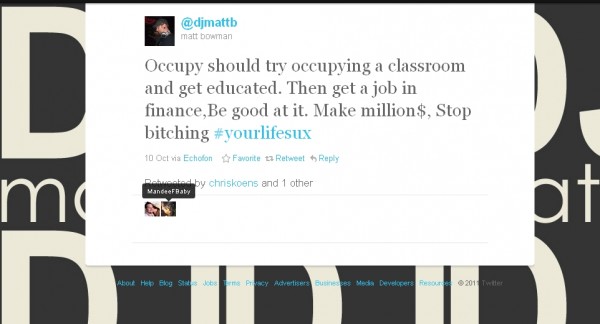 From Facebook: "I have been watching on the news and reading on the internets about the "Occupy" movement. Or protests. Whatever you want to call this nuisance.
I feel this is just another way for Liberal Arts majors to use big words and blame everyone else for the reason they aren't as wealthy as the "1%".
But I'm really glad you recruited your Art School pals to help march in this public bother! They helped make banners and posters, of which cannot be read by passersby, since you tried to include your entire manifesto on a 28"x22" poster or ripped apart shipping box, most likely purchased from a company you are protesting.
The only reason you talked your Art buddies into protesting, is because they failed to go into an Art field that paid as well and it gave them something to do, since they also have no job.
The 1% obviously put their time, effort and schooling, which by the way, cost them money, into something that made them millions, even billions of dollars. How can you protest that? It's not their fault they chose a path that made them wealthy. A path that created companies that are wealthy. Remind me, isn't that the American Dream? If your dream is to look, smell, act, work, live like a hippie, that's your problem. Don't blame others for your short comings.
Oil. Really? The 99% of you either walk or ride a god-awful bike in the street, in my way. You preach green, but bitch about oil you claim not to use. $4 a gallon is not a lot. It should have progressed to this level years ago, but since we had gas for $1 for so long, it seems crazy it jumped so fast. But you don't use it anyway, so quit complaining.
Ok, you'll contest me about the big "bailouts". Well, I'd rather have the government bail out our banks to prevent another 1930's. That just leads to another World War. BUT! Maybe that's what we need! We could have a draft system and draft all you protesters! Then you could fight for something! Or, you'll run to Canada. Problem solved. Either way, you're out of my way and city.
Go ahead, use a credit union. That way you're not in my way at my big bank. I don't have to wait for you to fumble around in your car for your card, check in on yelp, call your mom to see how much you owe for rent and finally inch up towards the ATM, only to find out you made all the wrong life decisions and your account has no money. Should have followed the 1%, huh?
I am by no means in this 1%. I am the 99%. But you know what? I'm not blaming anyone else for the life path I chose. Would I like to be extremely wealthy? Yes. Do I blame them for my problems? No. I don't pay a single fee at my big bank for having my accounts there. I drive a car and I don't complain about the gas prices. The government has not prevented me from doing anything that I've wanted to do. All I know is, this 1% helped build millions of jobs for people around the world. JOBS. Something you should probably have. Then you won't be OCCUPYing my streets. In the way of me trying to go to work.
ANARCHY!!!" 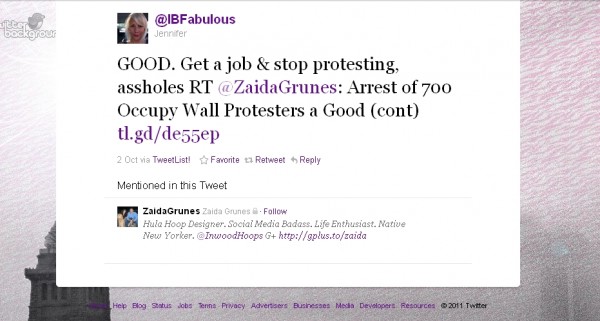 Other tweets: I understand ppl are frustrated w/ the economy & CEO salaries but think about this: MILLIONS of hardworking Americans work at Wall St firms. 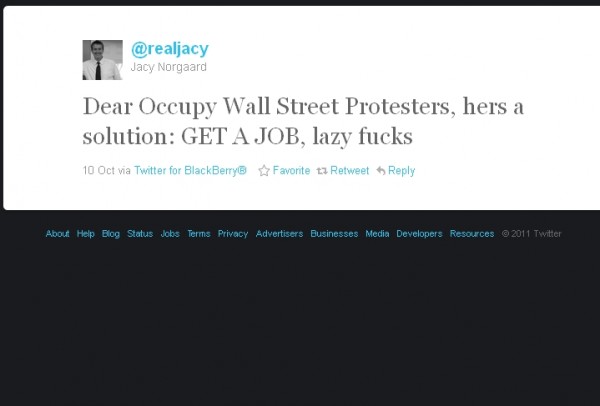 My name is Jacy Norgaard, I am 18. I am a sports photographer studying in college to become a Paralegal. My feelings towards the occupy Wall Street protesters are: go out and work and make a difference on your own. Invest elsewhere, buy from different corporations, etc. I think it is completely possible, If you apply yourself to become successful and have a voice, but you have to get on Wall Streets level. They will listen if they know you invest in them, and your as smart as them, but they won't listen if your standing on a street corner yelling. I made the get a job comment, because more than likely If they are standing and protesting all day, they aren't working. Unless they have a lot of vacation time. I have health insurance. I don't affiliate with a specific party. I would say I am more of a Conservative Independent. Fiscally speaking I don't believe in spending a ton, or cutting a lot more of a mix of both. And socially, I believe you do what ever you do. Believe what you want, marry who you want, etc.
Advertisement 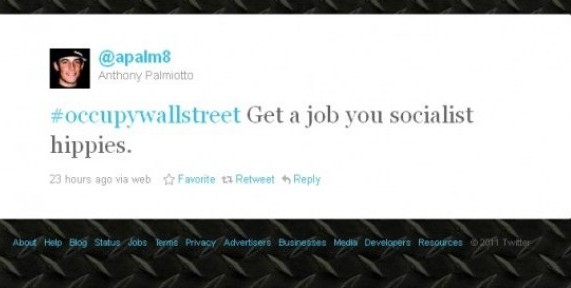 From website: Anthony Palmiotto of International Planning Alliance, LLC provides individuals , families, and businesses with financial strategies for wealth accumulation and protection while minimizing risk and lowering taxes...Anthony also helps his clients to enjoy their wealth over their lifetime with family and charities while still leaving a legacy to their heirs. 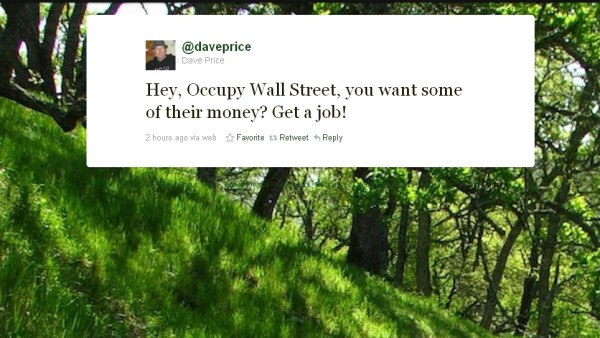 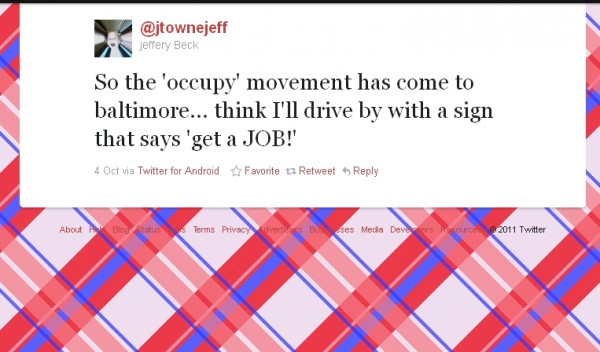 Funny story: In 2008, wrote a letter to the Baltimore Sun, arguing against the government bailing out Citigroup.
Advertisement 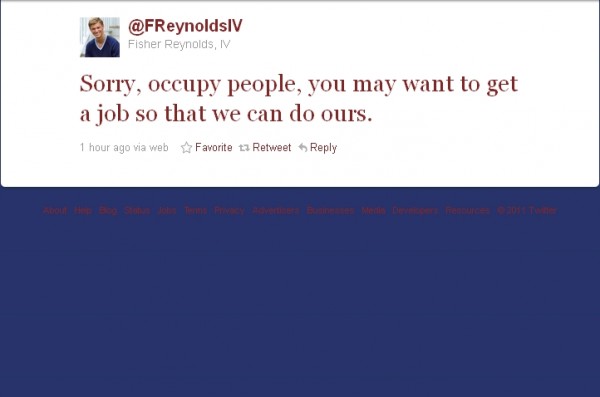 Facebook favorite quote: "The office of the President is always bigger than its occupant." -President George W. Bush 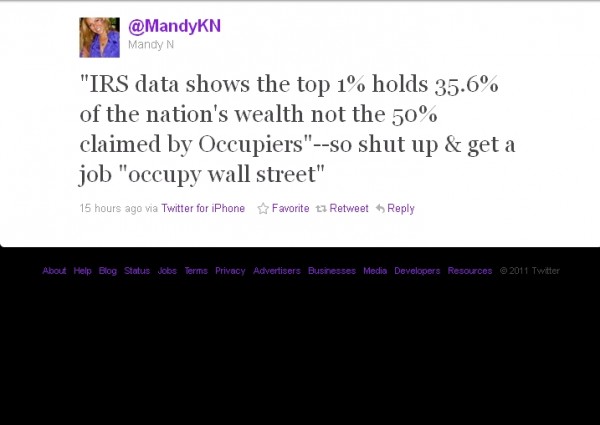 Mandy on writing vs. television journalism: "Until recently I would almost constantly complain "Ugh why do we even have to write for the newspaper I just want to do TV." But doing that Google search really got me thinking. Why, why do I care if my words are printed or on a television screen. Is it because I do not want to be anonymous? I suppose it must be, I wanted my face associated with my thoughts. How odd!" 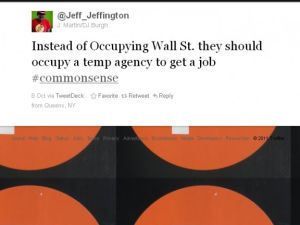 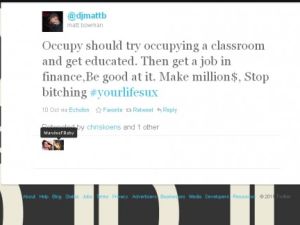 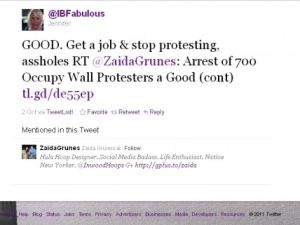 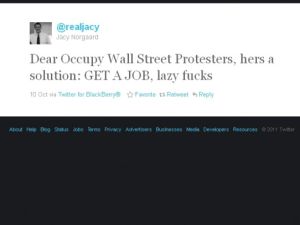 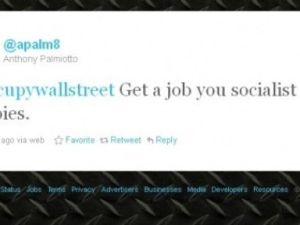 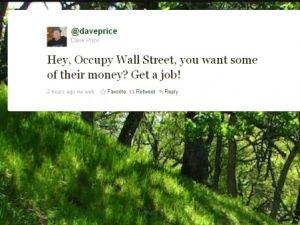 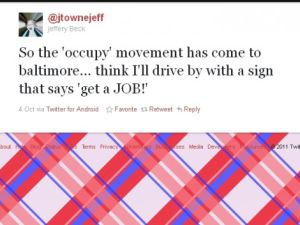 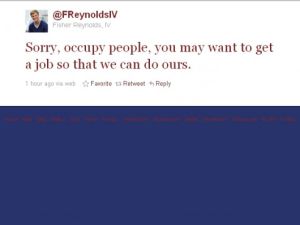 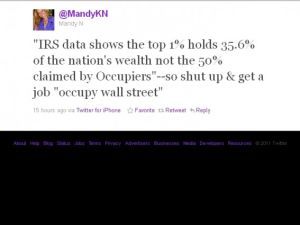 As obnoxious as it is to see constant updates about Occupy Wall Street on our Twitter feed, it’s even more annoying to see people tweeting “Get a job!” back at them.

First of all: Not original. Secondly: Isn’t that the point of the protests…that national unemployment is at 9.1 percent and it’s very, very hard to get a job these days?

We searched Twitter to find what sort of people were trolling with the  “Get a Job” line, and found out what kind of jobs they held.