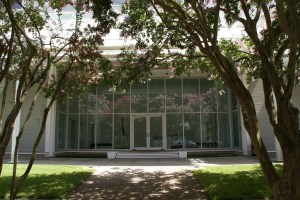 Michelle White, who helped organize the Richard Serra drawing retrospective, which recently graced the Metropolitan Museum of Art, has been promoted from associate curator to curator at the Menil Collection.

Ms. White has been with the Menil since 2006, when she joined as an assistant curator, and was appointed to associate curator three years later, Dallas Art News reports. Previously she had been a curatorial assistant at the nearby Museum of Fine Arts Houston.

Menil director Josef Helfenstein said in a statement, “Michelle distinguished herself … by organizing splendid exhibitions, presenting lectures and participating in other programs, and making important contributions to our scholarly publications.”

As Glasstire notes, there are major changes happening at the intimate museum: last month, the museum announced plans to open a café across the street from the main Menil building, which was designed by Renzo Piano and opened in 1987.

In other Menil-related news, former Menil curator Franklin Sirmans, who is now at the Los Angeles County Museum of Art, was just named artistic director of the Prospect 3 biennial in New Orleans.