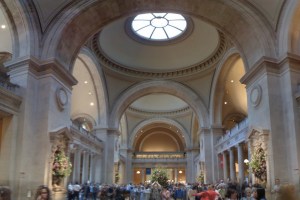 The entrance hall of the Met. (Photo: Michael Gray / Flickr)

When it comes to contemporary art, the Metropolitan Museum of Art tends to focus on super-safe exhibitions of canonized artists deep into their careers—think Robert Rauschenberg or John Baldessari—or small shows of well-established mid-career figures like Neo Rauch and Tara Donovan. Only occasionally has it explored recent art history, as it did with its 2009 “Pictures Generation” show.

But now it appears that it will venture down that path, with a new group show called “Regarding Warhol: Fifty Artists, Fifty Years,” which is scheduled in open at the museum in fall 2012. Details are scanty at the moment, but the description Gallerist has seen, culled from museum fund-raising literature, promises nothing less than “an in-depth examination of the nature and extent of the Warhol sensibility.”

The show will be organized by various themes, “each of which will be delineated by several of Warhol’s works, along with objects by other artists who have worked in his wake. The aim is not only to show direct influence but also to indicate how an artist may have developed Warhol’s example into new areas.”

Sure, it’s Warhol, so it’s still super-safe—the Met isn’t going out on a limb when it says he’s had a huge influence—but curators will be forced to make some tough decisions nonetheless, not just in defining “the Warhol sensibility” but in choosing how to present his impact and deciding which living artists to anoint.

Given Warhol’s popularity, the show seems likely to bring in large crowds. (The Museum of Contemporary Art Los Angeles’s 2002 Warhol retrospective stands as the second-most-visited show in its history.) It may also help attract some of the new money of the hedge-funders who pay millions of dollars for contemporary art.