A dirty home that's not your own (Getty)

Hey look who finally made it down to Occupy Wall Street! Why, it’s Mayor Michael Bloomberg! Is he finally here to join a drum circle and throw money into the air like the gentleman 1% he is?

From the Mayor’s office:

“Earlier this evening, Mayor Bloomberg went to Zuccotti Park to talk with the protesters himself and inform them that on Friday morning Brookfield Properties will clean the park.

“Brookfield Properties owns Zuccotti Park, and built it as an amenity for the general public. As the protest has continued, Brookfield has expressed concern about its inability to clean the park and maintain it in a condition fit for public use. Brookfield conveyed these concerns in a letter they sent to the City.

“The Mayor is a strong believer in the First Amendment and believes that the protesters have a right to continue to protest. At the same time, the last three weeks have created unsanitary conditions and considerable wear and tear on the park. This situation is not in the best interests of the protesters, residents or the City.

“The cleaning will be done in stages and the protesters will be able to return to the areas that have been cleaned, provided they abide by the rules that Brookfield has established for the park.”

On the one hand, this whole “cleaning thing” feels like a loophole Brookfield found and Mayor Bloomberg was only to happy to comply with. This cleaning could take days, weeks…months even!

On the other: have you been to that park lately? With no public bathrooms or places to wash, the place is a bit unsanitary. When we were down Tuesday night, we saw some guys washing the sidewalks with bleach; an apparent tactic to try to forestall the inevitable. 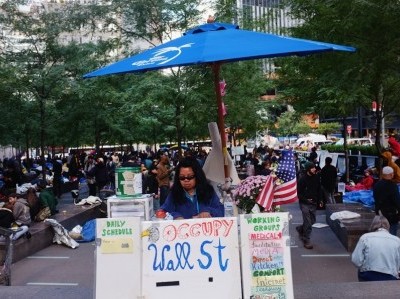