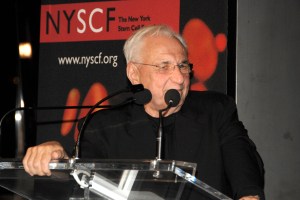 Construction delayed on Frank Gehry’s Guggenheim in Abu Dhabi after the emirate decided not to award the contract to build the museum. A spokesperson for the emirate’s tourism board has said it will now open in 2015, not 2013. [The Art Newspaper]

The Sterling and Francine Clark Art Institute has announced that architect Tadao Ando will design a 44,000-square-foot expansion to its campus. [Bennington Banner]

In case you missed it: here is a story about where arts and social media collide collide in practical ways. [NYT]

On the art that has been made at the Occupy Wall Street protests. [WSJ]

Malcolm Forbes will sell his Queen Victoria memorabilia at auction next month. [The Guardian]

Laura Raicovich, the deputy director of Dia, has announced that she is joining New York nonprofit Creative Time to become director of global initiatives. [ArtDaily]

“I’d never even seen Andy Warhol drink before. But Dalí was making him so nervous he was guzzling back wine.” [The Guardian]

Now the Times has sounded off on the “robust” sales at FIAC, despite a struggling economy. [NYT]