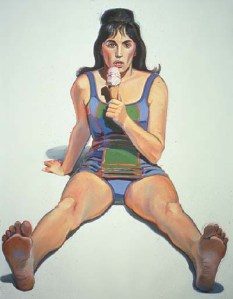 The Guggenheim plans a massive, black-and-white-themed Picasso show for next year, and Acquavella Galleries (whose Braque show we profiled in the paper this week) now represents Wayne Thiebaud. [Inside Art]

Protestors flew to London to protest at Sotheby’s during yesterday’s contemporary art auctions. The sale made $63 million, with a few paintings, including a £2 million Peter Doig, going unsold. [Bloomberg]

Beatrice Gersh, a Los Angeles collector who helped to found the L.A. Museum of Contemporary Art, has died at 87. [The Los Angeles Times]

The French government is investigating art dealer Guy Wildenstein on new charges that he may have hidden billions of euros around the world. Some experts believe that his fortune may stand at $5.5 billion. [Artfix Daily]

Roberta Smith on George Braque, “The Other Father of Cubism.” [The New York Times]

Gary Nader, a Miami-based art dealer, is planning to open an auction house during Art Basel Miami Beach. Called Nader’s, the house will hold four to five sales a year. Starting things out, on December 1, is a 112-lot art auction estimated to make $40 million.

That goofy artist who always makes the Post by painting nude women is now allowed to do so, but only at night. [Reuters]