Rage Against the Machine plays in Zuccotti

In case you were wondering if the the True Life: I’m Occupying Wall Street, Real World: Occupy Wall Street, or the other efforts MTV has made to co-opt this revolution will somehow just fade away, this should help answer your question. Today, MTV announced its O Movie Awards would be giving out a special “Occupy Wall Street” award to Tom Morello, lead guitarist of Rage Against the Machine, for his performance in Zuccotti Park.

The O Music Awards, now in their second year, represent multi-platform and digital artists. And since Tom Morello and his band – playing under the guise of The Nightwatchman, didn’t record their Oct 13th performance  but let their impromptu show be broadcast through a viral networks of smartphones, who better to win the award?

Said Morello: “It’s an unusual title for an award, but it’s an award that is for the worldwide rebels who are now occupying 1,300 cities around the planet,” Morello told TheWrap. “The one thing that all the Occupy cities have in common is everyone pitches in and cooperates. I’m a musician, so I pitched in and played.”

This will be the first time Rage Against the Machine will have been relevant since 1998. 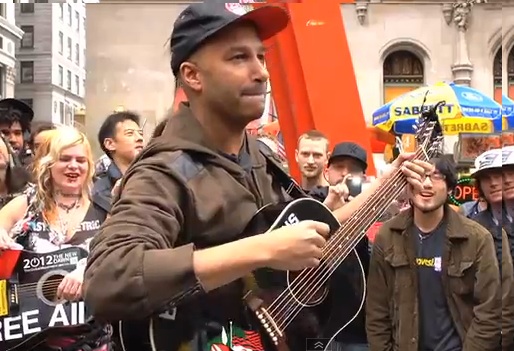