If one was trying to tack the label of antisemitism onto the Occupy Wall Street movement, (which apparently, everyone is) one needs to look no further than David Brooks‘ October 10th op-ed for The New York Times, entitled “The Milquetoast Radicals.”  In it, he points to a 2004 article from Adbusters – the Canadian magazine that first put out the call to action for OWS way back in July – with the damning title of “Why Won’t Anyone Say They Are Jewish,” which plays the guessing game of Republican NeoCon’s religious orientation in relation to their pro-Israeli stance.

But isn’t using Adbusters to discredit what is now an independent, international movement sort of, well, besides the point?

It’s true that there is some really inflammatory rhetoric in the Adbusters‘ listicle of the Jewish neocons they produced, and even more in the response to criticism that editor-in-chief Kalle Lasn eventually gave. (Note: original spelling left intact):

The list of Jewish neocons we came up with is a provocation, I’ll admit. And if it were a list of dentists or firefighters  or stockbrokers, then that would indeed be very offensive. However, the neocons are no ordinary group – they are the most influencial political/intellectual force in the world right now. They have the power to start wars and to stop them. They are the prime architects of America’s foreign policy since 9/11 – a policy that is heavily weighed in favor of Israel and a key-source of anti-Americanism in the world. So I think it is not only appropriate, but necessary to put them under a microscope. And if we see maleness, Zionism, or intellectual thuggery there, then let us not look the other way.

On the ethnic question: Is it not just as valid to comment on the Jewishness of neocons as it is to point out that the majority of them are male or  white or wealthy or from the Western world or have studied at a particular university? If half the neocons were Palestinians, would the US have invaded Iraq?

Well, that certainly lends credence to the argument that this protest was founded by an anti-establishment, anti-American, antisemitic, (and worst of all) Canadian publication. Just like it would be easy to point a finger at Anonymous – another early supporter of the OWS movement –  and say that all of the people in Zuccotti Park (and across the country),  are all anarchist hacktivists. It’s easy to say these things precisely because it’s lazy journalism at best, fear-mongering at worst.

The Occupation of Wall Street may have originated from an Adbusters‘ call-to-arms, but the magazine does not speak for the protesters or their many differing beliefs. They aren’t the “organizers” or “leaders” of the group, either.

If you are going to argue that OWS can not present a cohesive message because there are too many people with too many different grievances, you can not then turn around and dismiss the movement by saying its whole ideology is based on one inflammatory article criticizing America’s pro-Israel stance from seven years ago. (As Fox News has done.) An article, we might add, that was given far more attention by the press itself than Occupy Wall Street, which has made its clear on its official website that it is “not affiliated with Adbusters, anonymous or any other organization.” 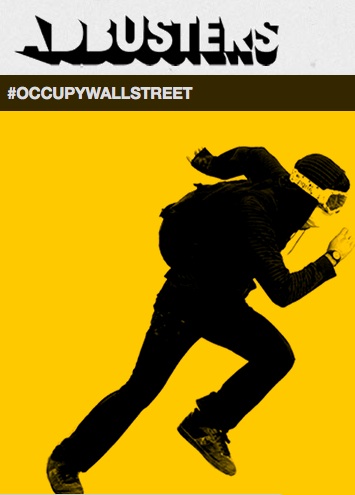